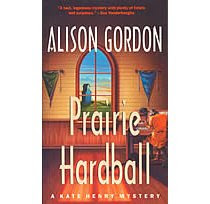 27. – 588.) Prairie Hardball by Alison Gordon – I re-read my favourite Saskatchewan mystery as I was not writing reviews when I read it the first time. I love the book because it is set in rural Saskatchewan, has a baseball theme, focuses on the Saskatchewan Baseball Hall of Fame of which I am Second Vice-President and features the induction banquet for the Saskatchewan women who played in the All American Girls Professional Baseball League which I attended in the mid-1990’s. Over half of the 50 plus Canadian women who played in the league were from Saskatchewan. I examined every character in the book carefully but none resemble me.

In the book, Kate Henry has returned to Saskatchewan to accompany her parents to Battleford where her mother, Helen Henry, will be one of the inductees. She had played several seasons for the Racine Belles. Joining Kate is her partner, Andy Munro, a Toronto police inspector on his first trip to Saskatchewan.
Gordon’s description of Kate’s hometown, Indian Head, is a perfect portrayal of small town Saskatchewan. She has been a skilful observer of us.
At the banquet Virna Wilton creates a grand entrance by wearing her old uniform over 40 years after she last played baseball. (I can vividly recall the actual lady who wore her uniform to the induction banquet. She looked great.)
The banquet was Saskatchewan charming. It is hard for me to distinguish real life memories from Gordon’s description. It was a nice evening honouring a group of women who had never received the recognition due them.
In the book everyone is shocked when Virna is murdered. Andy is asked to help the local RCMP. The nosy Kate demands to know everything going on in the investigation. The probing of lives brings out secrets that startle and even shock Kate. Life in the AAGPBL was more complex than she realized.
The book goes into some detail on the AAGPL which existed from the early 1940’s to the mid-1950’s. The movie, A League of Their Own, with Madonna, Geena Davis and Tom Hanks was a Hollywood version of the league. It was not sensationalized as much as many Hollywood movies but Gordon’s description of the league is far more factual.
Within the book Helen was a woman professional baseball playing pioneer and Kate was a woman professional baseball sports writing pioneer. (In real life Gordon was the first woman journalist to cover major league baseball in Canada.)
Those young woman who went South from Saskatchewan to play baseball were an intrepid group leaving friends and family to play sports at a time when travel was limited and society offered little support for women making any career let alone an athletic career. I met several of the actual players from Saskatchewan and wrote about them for the sports column I write in Melfort. They were as gracious and lively as the women described by Gordon.
The mystery flows well. I know I am enjoying a book when the pages glide by and there is no consciousness of time passing. It is the best rural Saskatchewan mystery. (May 21/11)
Posted by Bill Selnes at 3:22 PM