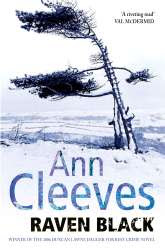 67. – 627.) Raven Black by Ann Cleeves – The Shetland Islands had been a distant place for me somewhere north of Scotland until I read Raven Black. As with the best mysteries I now have a sense of those far away islands.

It is mid-winter in the Shetlands. Snow has blanketed the islands. It is cold. On New Year’s Eve Catherine Ross and Sally Henry, 16 year old girls, drop in on Magnus Tait, a senior living a reclusive lifestyle. It is a minor adventure for the girls to enter his home. While Tait is a simple man he has a disquieting reputation. Having grown up in rural Saskatchewan I am familiar with each person acquiring a reputation in the community.
Shortly after Catherine is found slain in the snow near Tait’s home. The description of the lovely young woman lying on the brilliant white snow with the killing red scarf around her throat “the fringe spread out like blood” was a cold striking image.
Community suspicion is focused on Tait just as it had 8 years previously when Catriona Bruce had disappeared. While never charged the islanders have remained suspicious of Tait.
Detective Jimmy Perez starts the investigation and is immediately joined by a team sent from Inverness led by Roy Taylor. The investigation concentrates on Tait but Perez is skeptical.
The Shetlands were a closed community which has been forced open by the oil boom. There is continuing tension between the generational islanders and the incomers who have recently arrived on the islands.
Though an incomer, Catherine, had fitted more easily into Anderson high school than the islander, Sally. I found it interesting that the parents of both girls feature prominently in the plot.
Fran Hunter is an incomer who has married and separated from the charismatic islander, Duncan Hunter. She is trying to adapt to island life with her daughter, Cassie.
Perez has grown up on the even more distant Fair Isle. (Can there be a more romantic name for a place?) Over 20 years later he is still affected by having to leave the island and go to Lerwick to live in a hostel when he was 12 to attend school. I went away to a boarding school when I was 15. I can relate to the loneliness and difficulty fitting in for a shy boy gone away from family and farm for schooling. It may be a challenge for those who have grown up in cities but I did not find life on the farm more isolating than my subsequent residences in urban places. 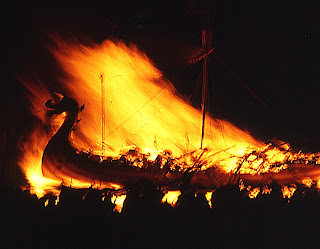 As winter and the investigation progress the focus of island life is on the annual celebration of their Norse heritage, Up Helly Aa. It is the most important winter event.
It took me some time to get involved in the book but I was glad I kept going as I became more and more intrigued by the characters. The conclusion was a breathtaking rush.
I know I shall return to the Shetlands for more of the series. Excellent. (Dec. 10/11)
Posted by Bill Selnes at 7:41 PM