The Placebo Effect by David Rotenberg 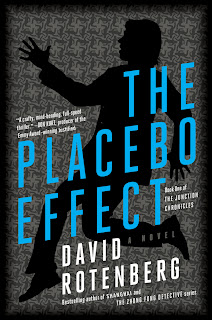 62. – 623.) The Placebo Effect by David Rotenberg – Decker Roberts is a synaesthete. His innate gift is the ability to tell if someone is telling the truth. When he hears a statement he can close his eyes and the patterns he sees tell him if the statement is true. It is a gift sought after in the business world and he is well paid to see and listen to job applicants. His talent works best when he can see the speaker.

Decker is a resident of the Junction area of west Central Toronto. When not determining the truth he is a film / theatre director and acting teacher. He lives with considerable personal sorrow. His wife has died of ALS. He is estranged from his 19 year old son, Seth.
Another synasethete, Michael Shedloski, has a gift for balancing items creating unique sculptures from ordinary items. His gift extends to determining the ratios that provide balance in many other circumstances.
Cincinnati pharmaceutical manufacturer, Henry-Clay Yolles, is struggling with the cost of production of a new anti-depressant, Calatrex. He hires Shedloski to work out a new ratio between placebo and active drug. When Shedloski provides an increased ratio that makes the drug feasible he is dumped by Yolles.
Yolles is interested in calling on Decker’s truth telling talent. A resentful Shedloski publicly protests his dismissal and decides to warn Decker that Yolles will take advantage of him.
In Washington D.C., the National Security Agency (NSA), is very interested in Decker as a means of evaluating information from those who threaten America. Yslan (pronounced “island” without the “d”) Hicks, studying synasethetes, is carefully observing Decker. The NSA becomes ever more involved as it wants to protect a potential asset.
Narrowly escaping death when his house burns down Decker initially does not even realize it was attempted murder. After realizing someone is trying to kill him Decker searches for his attacker. The pace accelerates as Decker is both pursued and pursuer. The book is at its best following Decker in his quest. There is a startling twist with regard to his son, Seth.
There are touches of the supernatural throughout the book. I am not found of the supernatural in thrillers or mysteries but it t never becomes dominant in the book.
Decker is a unique hero. I had never heard of synaesthetes before reading the book. Ordinary synaesthetes have a crossing of senses such as seeing letters of the alphabet in colours.
The book is unusual in the plot shifting back and forth between cities in the United States and Toronto. Few mysteries and thrillers move between the countries.
It is the first book in The Junction Chronicles. There are lots of unexplored threads to the lives of the primary characters. I enjoyed the book. I did find it disjointed at times. It is a thriller seeking to meet the challenge of balancing action in the mind and physical action. I have high hopes for the second book in the series.
The Placebo Effect is my 7th book of 13 to be read in the 5th Canadian Book Challenge. I have now reached the Lac Mistassini level.
(The Placebo Effect is being published on February 7, 2012. I am following this review on Wednesday with Questions and Answers with David as part of the Simon & Schuster blogger tour for the book. I will conclude the trio of posts on Friday with my thoughts on David's answers.)
Posted by Bill Selnes at 6:05 PM