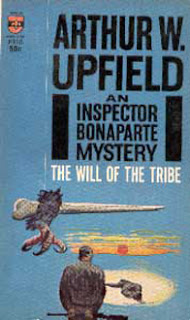 2. – 634.) The Will of the Tribe by Arthur Upfield (1962) – Napoleon “Bony” Bonaparte is in the remote reaches of northwest Australia in the vicinity of the Kimberley Mountains. He has been called to investigate the death of an unidentified white man found in the centre of Lucifer’s Couch, a crater formed from a meteorite crashing into the earth. (In real life it is the Wolf Creek Meteorite Crater. An aerial photo of the crater and a photo of the wall of the crater are included in this post.)
Unlike other Bony investigations the authorities are less interested in finding the killer than in determining how this man reached the area unnoticed. Thus the book is a most unusual twist on the locked room mystery. Here the body is found in the middle of a room consisting of thousands of square miles of territory. How did he get there? He had to travel hundreds of miles to reach the crater. A horse or a vehicle would have drawn attention. A plane would have had to fly from an airport. It is impossible to see a white man travelling the vast spaces on foot without ample supplies.
Bony settles in at the Deep Creek cattle station with Kurt and Rose Brentner and their two daughters, Hilda and Rosie. Among those working at the station are Tessa and Captain, members of the local aborigine tribe who have been educated and given responsible positions at the station.
The book, one of the last Bony books, is the most challenging of the Bony mysteries I have read because of its treatment of the aborigine characters. 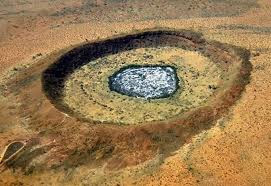 The white characters definitely consider themselves superior. While no longer acceptable by the early 1960’s, the book makes clear it was not long before that time that it was acceptable for a white man to thrash an aborigine he considered disobedient.
The attitudes, particularly of the white people, felt accurate to me. I can well remember as a child in Canada 50 years ago the way Indian people were generally looked down upon by white society.

The aborigines of the area are divided into three groups. The wild blacks are some distance away in the desert. The station blacks are dependent on the station while living in their own camp. The educated aborigines, Tessa and the Captain, live at the station.
It is an era of transition. The lifestyle of the wild blacks is gradually being eroded. Official Australia would like to see the aborigines assimilated into the white population. The same approach was in place in Canada at that time. For decades it was our Federal Government’s policy to assimilate the Indian peoples of Canada with white Canadians. 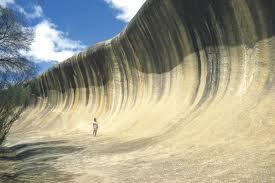 Yet the book is far subtler than the surface portrayal of white discrimination and condescension. Bony, half white and half aborigine, has strong opinions on such matters as inter-racial marriage, aborigine connections with tribe and education of aborigines. How should the aborigines adjust to the vast white population that has taken over their continent? Should they assimilate? Should they seek to remain distinct? I found myself thinking more about the questions of culture and race than the mystery.
While I became involved in the societal issues raised the book is focused on solving a “locked room” mystery. For the vast open spaces needed to create the “locked room” it could only have been set in Australia or Canada or Russia or Antarctica.
The book is tied to the countryside and the people of Australia. Bony makes good use of his tracking skill and ability to question white and aborigine witnesses.
It is a good mystery which left me thinking not only about the treatment of indigenous people 50 years ago but how the same issues are being addressed today. (Jan. 5/12)
Posted by Bill Selnes at 4:11 PM