I’ll See You in My Dreams by William Deverell 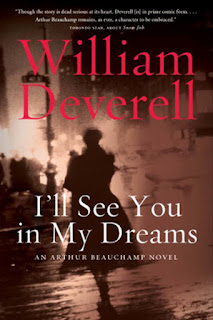 I’ll See You in My Dreams by William Deverell – Arthur Beauchamp is back in a murder trial. The publication of a biography of Beauchamp by Wentworth Chance has prompted Beauchamp, now in his mid-70’s, to reflect on his first murder trial 50 years ago in 1962. At 25 he was assigned to represent a young Indian, Gabriel Swift, from the Squamish Band near who has been accused of murdering his employer, professor Dermot Mulligan.

As Louise Penny did in Bury Your Dead, Deverell is working with three plots. Unlike the Penny book they all deal with the same subject.

In the book, Deverell is simultaneously writing Beauchamp’s current reflections on the old trial, excerpts from the somewhat pompous biography and Beauchamp’s experiences five decades earlier in representing Swift. He does it very well.

Beauchamp is initially challenged because Dermot had been a mentor and hero when Beauchamp was a student at UBC a few years earlier. There is an underlying issue on what happened when Dermot was principal of an in two decades earlier. My next post will discuss, through a look at crime fiction in several countries, the terrible problems arising from how indigenous people were educated in past generations.

What is most striking in the book is the relationship between Beauchamp and Swift. His client is a very bright man, mainly self-educated, who speaks several languages and is a Communist.

To the RCMP of the day he is a lippy Indian. He does not fit their stereotype image of what is a good Indian. The same attitude was set out by Arthur Upfield in The Will of the Tribe.

Ordinarily the lack of a body would be a major challenge for the Crown prosecutor but there is significant circumstantial evidence of murder. Beauchamp is convinced his client is being framed.

Adding to the challenge of defending Swift is the charge of capital murder. If Swift is convicted he will be hung. (The trial, set in the early 1960’s, takes place near the end of the capital murder charge in Canada.)

Beauchamp is weighed down by the consequences of losing the trial. He forms a close bond with his client and can hardly bear to think about him being executed.

Beauchamp faces a dilemma constantly encountered by defence counsel but at its most intense in capital cases (death penalty cases in the ). Should he attempt to reach a plea agreement that will save his client’s life but send a man, he is sure is innocent to jail?

Eighty years ago ’s most prominent criminal lawyer, John Diefenbaker, was representing a young man charged with capital murder. It appeared that his client could have pled guilty to manslaughter because of drunkenness. Diefenbaker, confident of an acquittal, urged a trial. He was wrong. His client was convicted and hung.

The issue of whether to plead guilty was the subject of another Canadian mystery last year, The Guilty Plea by Robert Rotenberg. No longer was the client’s life at stake but the hard decision of whether to make a deal was well explored.

Compounding the situation is Beauchamp’s age. I was also a young lawyer at 25 doing some criminal defence work. I was not ready for a murder trial. Beauchamp is equally unready.

In defending someone the decision whether to recommend a guilty plea is often the most important decision to be made by defence counsel.

While the subject matter is very serious Deverell has not abandoned the comedic touch so evident in the previous Arthur Beauchamp legal mystery, Snow Job. The young Beauchamp has a sexual fetish I have not encountered in crime fiction.

I also appreciated the interactions between the lawyers. They are more sophisticated than the totally adversarial descriptions of many legal mysteries.

It is a book that made me grateful on many levels we no longer have capital murder in .