The Lies Have It by Jill Edmondson 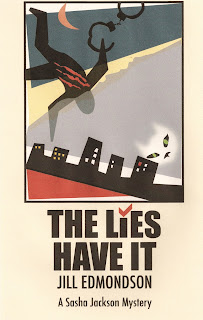 (6. – 638.) The Lies Have It by Jill Edmondson – In her 3rd mystery Sasha Jackson is in fine form roaming Toronto by public transit, taxi and foot. She is a rare North American sleuth in failing to drive around the city.


The book immediately grabbed my attention with Sasha tending bar in the private meeting room of the Pilot Tavern for an S & M party sponsored by the group, Bound for Glory. It is a wonderfully apt name for a gathering of role playing fetishists.


At the party there was a remarkable diversity of fetishes among the guests. The description of a party goer playing nurse in a micro mini and a “cute little nurse’s cap with a red cross on it” brought back vivid personal memories of a tour, 15 years ago, down Church Street (the heart of gay Toronto) led by a gay friend. Helping him conduct the tour was a 6’ gay man, with perfect makeup, and lovely curling lavender hair down to his waist wearing a bright white nurse’s uniform and equally cute cap. Being on Church Street we drew less attention than you might expect for our group.


I like finding a connection to characters and activities in books I read. It increases my enjoyment of the reading. While I have walked Church Street I openly acknowledge I have no relationship with the S & M role playing described by Jill. The world of domination and bondage is far beyond my life experiences.


Returning to the book, Ian, big, burly and bearded, is the host and organizer of the party. His party attire is limited to a “black leather ‘kilt’ and black lace-up boots”. After he is found dead the next morning, still in his party clothes, Sasha enters deeper into the kinky world of S & M to find the killer.


Most S & M participants lead dual lives. Ian is a leather clad weekend submissive and a finishing carpenter with a young daughter by week. Through the book Sasha weaves her way through the two worlds of Ian’s life.


While investigating the murder Sasha has another case searching for a runaway teenage girl. It is a gritty dangerous life on the street.


Sasha continues her quirky life. What other hardboiled, 30 something detective, still lives at home with her father and brother? I was glad to see her relationship with a downtown lawyer, Derek, is proceeding nicely.


I did figure out the killer rather quickly. Still the plot was strong enough to sustain the story. With Jill's steady progression as a writer I expect a stronger mystery in the next book.


I really enjoy Sasha’s conversations. In her directness and wit I was reminded of the Spenser books. Robert B. Parker created sharp interesting dialogue. Sasha remains a caustic observer of the world but her hardest edges, especially with regard to swearing, are alittle less sharp. Sasha is an intriguing character. I found myself reading swiftly through The Lies Have It in the same way I move rapidly through a Spenser mystery.


With each book an improvement on the book before I think the 4th in the series could be a break out book for Sasha. Edmondson has found her mystery voice. (Jan. 31/12)