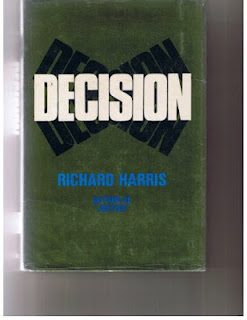 21. – 653.) Decision (1971) by Richard Harris – When Sharon cleaned my den last week this book popped up on top of my desk. Obviously calling to be read I found it absorbing and wished I had read it sooner.


In 1970 Richard Nixon was looking to appoint a Southerner to the U.S. Supreme Court. Rebuffed by the Senate with regard to Clement Haynsworth he nominated G. Harrold Carswell, a U.S. Federal Court judge from Florida, to fill the spot. Harris writes about the campaign in the U.S. Senate to reject the Carswell nomination.


Initially, there was little interest in another battle. It is rare for the Senate to reject consecutive nominations from any President. Carswell was to prove the exception as he was a deeply flawed candidate.


African Americans were the first group to challenge the nomination. They distrusted a man who, when he was 28, had given a campaign speech in 1948 stating his “firm, vigorous belief in the principles of white supremacy”. A few years later he helped prevent a public golf course from becoming integrated by participating in its incorporation as a white only private golf course.


While he protested he was not the same man in 1970 his actions on the bench had been no better in the years leading up to the nomination. He consistently delayed the progress of civil rights cases. When he had to rule he did his best to resist the upholding of civil rights. Few, if any other Federal Court trial judges, were reversed 17 times unanimously by the Court of Appeal on civil rights cases.


Overall he had a stunningly high reversal rate of over 40% of his decisions.


The other major source of opposition came from the legal community which opposed him because of “his dismal record in the field of human and civil rights and his lack of judicial stature in general”.


Republican Senator, Roman Hruska, inadvertently supported his lowly judicial stature with one of the most famous quotes in history about a Supreme Court nominee:


‘’Even if he were mediocre, there are a lot of mediocre judges and people and lawyers. They are entitled to a little representation, aren’t they, and a little chance? We can’t have all Brandesis and Frankfurters and Cardozos and stuff like that there.”


Most of the book is about how a campaign is built in the U.S. Senate against, in this case, a court nomination.


Without the party discipline of many countries Senators and their aides, especially their aides, must work hard to convince individual Senators to vote in their favour. Specific approaches were adopted for swing Senators. Personal contacts of each Senator who might influence the Senator were searched out and asked to provide personal pressure points. It is a time consuming process.


Harris makes clear the key point in any Senate campaign is convincing enough Senators that it could be successful for them to invest their time in the issue. With Carswell there was enough dissatisfaction reaching Washington from the people of America that Senators decided to truly consider the nomination.


While every vote on a Supreme Court nominee should be on the merits the book illustrates repeatedly how political considerations decided many of the votes. Recent U.S. Supreme Court nominations have demonstrated that politics has become an ever greater factor. It would be difficult to find an American Senator today who would say as Robert Griffin did during the nomination contest that “the Court is sacred and must not be used for political ends”.

Part of the success of the anti-Carswell campaign was due to 1970 being a time when there were Republicans identified as moderate and liberal.


The Nixon White House probably assured Carswell’s defeat with a clumsy letter lecturing the Senate by claiming it had a duty to accept the nomination.


Over 40 years later the white supremacy statements of Carswell would prevent him from ever being nominated. At the same time the ideological divide is such in America that it is hard to see opponents of a nomination gathering significant support from the other party.


I am following with a post on a book about Harry Blackmun who was Nixon’s nomination after Carswell.


Decision is an excellent exploration of how the American Senate functioned 42 years ago though the only cover I could find to post is a strong candidate for worst ever. (Apr. 23/12)
Posted by Bill Selnes at 10:31 PM