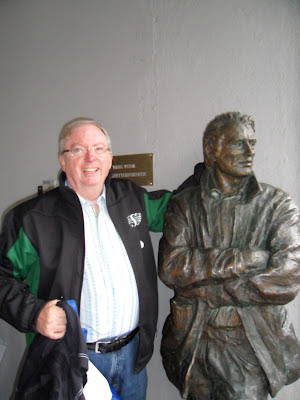 Sharon and I are on a cruise in northern and visited on Monday. We took a bus tour that went to Edvard Grieg’s home and museum. When we arrived back downtown I asked if the statue of Varg Veum at the Strand Hotel was in the vicinity. When our tour guide said he had not heard of Veum and looked puzzled about the I was not optimistic we would see the statue. However, the bus driver knew where the was located.

It turned out the hotel had been taken over by the Scandic chain and was now known as the Scandic Strand. It was actually located where we were stopping to look at the fish market and buildings.

We walked over to the hotel and Varg was standing against an alcove on the side of the hotel with a door leading into the building.

The bronze Varg looked very comfortable leaning against the wall. Sharon took the above picture of me with Varg. I cannot say the statue fit my mental image of Varg but the author was satisfied and it is a unique way to honour an author who put on the world mystery book stage. I think other cities should consider bronze statues of their sleuths. There are a lot of statues around the world honouring less worthy subjects. To the right is a photo of Gunnar Staalesen with his sleuth, Varg.

Any mystery lover heading to Bergen has a unique statue to enjoy and a special photo opportunity.