“V” is for Michael Van Rooy 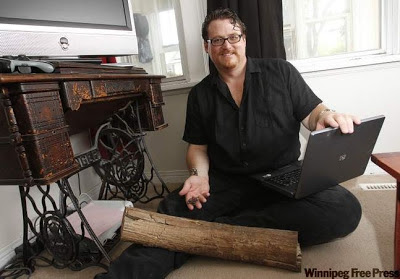 The end of the 2012 Alphabet in Crime Fiction meme hosted by Kerrie Smith at Mysteries in Paradise is near with the letter “V” this week. I have chosen to profile Canadian writer, Michael Van Rooy for “V”.

Van Rooy  was a Winnipeg, Manitoba writer who sadly died last year at 42 of a heart attack. He had been gaining fame for his series of books featuring Monty Haaviko who had become Sam Parker in an effort to escape his criminal past.


It was a subject with which Van Rooy was on personal terms. Morley Walker explained in the Books section of The Winnipeg Free Press in a column in 2010:


After graduating from Sisler High School, he studied history at the University of Manitoba and moonlighted as a blackjack dealer in one of the province's early casinos.


This put him in the vicinity of some disreputable characters. At age 21 he was found guilty of two charges of armed robbery.


"I didn't do it," he insists, despite some caginess about this chapter in his life. "I was in the wrong place at the wrong time."


He spent nearly two years as a guest of the criminal justice system, doing time in Stony Mountain and Rockwood Institution before receiving parole.


But the experience, which he recommends to no one, haunted him for more than a decade after and obviously informs his writing even now.


At six-foot-six and 290 pounds, he worked as a bouncer and a bartender, then a bar manager and restaurant manager. In the early 2000s he managed the McNally Robinson Booksellers' Prairie Ink Cafés. And he wrote novels on the side.


Van Rooy spent a great deal of time in organizations devoted to writing. The obituary in The Winnipeg Free Press stated:


He served as audience development co-ordinator and publicist for the Thin Air Winnipeg writers festival, he was a board member for the Manitoba Writers' Guild and Prairie Fire magazine and an administrator with the Winnipeg Writers' Collective and the Canadian Mennonite University writing school.


The year before his death he was designated "arts ambassador" for literature for the 2010 Cultural Capital program of the City of Winnipeg.


His writing skills had been recognized in 2009 when he won the John Hirsch Award as the Most Promising Writer in Manitoba.


The photo above from The Winnipeg Free Press accompanied an article featuring some of his favourite things:


If your house were on fire, heaven forbid, what's the one
item contained within that you would try to take with
you? (People and pets not included.)


What's the oldest thing you own?


Describe your most beloved piece of furniture.


My most beloved piece of furniture is a treadle Singer
sewing machine that currently holds up the television
with the Xbox on the treadle. It's godawful heavy but I
treasure it for the memories of bringing it to and from the
cabin, balanced precariously in an open boat.


I read and reviewed the first book in the series, An Ordinary Decent Criminal. In it Haaviko / Parker struggles to escape the stereotype society has of an ex-con. In particular, his treatment by the police is striking and frightening. It is a powerful book. I said in my review:


It is hard boiled fiction with a character seeking to change in a world that refuses to believe he has changed.
Posted by Bill Selnes at 11:05 PM