Not Without Prejudice by Sir David Napley 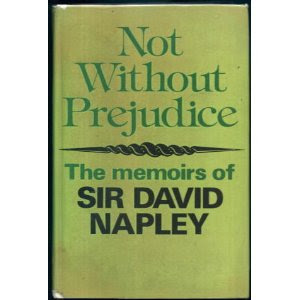 54. – 686.) Not Without Prejudice by Sir David Napley – While I have read numerous biographies and autobiographies of English barristers I had not read any about solicitors. Napley was a prominent English solicitor advocate.


In this post I will discuss his life. In my next post on Tuesday I will review some of his cases showing the skills that made him a very successful solicitor. For readers who do not know the distinction between a barrister and a solicitor you look to the type of law being practiced. Barristers conduct court proceedings. Their practices are limited to appearing in court. Solicitors prepare cases to go to court, appear at lower levels of court and handle all of the non-court legal work required by clients. While you are either a barrister or solicitor in Great Britain all Canadian lawyers are both barristers and solicitors. My practice involves both appearing in courts and taking care of non-court matters for clients.


Napley wrote the book when he was 66. It covers his first 50 years in the legal profession. He started his articles at the age of 16 in 1932. Napley was from a generation in which you could become a lawyer without attending a university law school. His articles took him 5 years. In the mid-1970’s when I articled in Saskatchewan after completing law school articles were for a year.


He began in an era where office machines were limited to the typewriter and adding machine. Carbon copies were the primary method of copying letters and documents. I just realized that when I started working in a law office in 1975 carbon copies were still the standard means of making a copy. In Napley’s earliest days, to ensure copies were of the original document there would, in addition to the carbon copy, be another copy made, often illegible, with wet carbon material in large bound copy books.


As a young solicitor wanting experience with court cases he took on legal aid cases. Then, as now, lawyers were poorly paid for such representation but it was a means of getting known in the courts.
World War II interrupted his legal career. After spending time in India he was invalided out of the army early in 1945. It proved an advantage as he was able to re-establish his career before most lawyers were released from military service. While the shortage of lawyers gave him opportunity Napley possessed a key trait for achieving success in the profession. He was willing to work all day and well into the night.


After starting the process of becoming a barrister he turned away and stayed a solicitor. A barrister he trusted assessed his personality and prospects and advised Napley remain a solicitor. At that time prospects for a good living were better for solicitors than barristers. While he said he had “no real regrets” I think he wished he would have become a barrister. It was clear he found it difficult turning over to barristers the cases he had so carefully prepared as a solicitor. Napley was a strong advocate of eliminating the distinction between barristers and solicitors.
After the war he had a wide ranging practice. In addition to criminal work he did:


It is the type of general practice with which I am most familiar as it parallels my practice. Napley, as I have, found that type of practice demanding but always interesting.


In the book he focuses on the cases – mainly criminal – which brought him fame. I doubt many would buy a book concentrating on a solicitor’s most interesting conveyancing files.


Napley was a fearless solicitor advocate. He pursued cases which made the Establishment uncomfortable. He fought for clients upon whom it was clear the police had planted weapons.


His life was a whirlwind. He unsuccessfully sought to be elected to Parliament. He spoke often at events, frequently attended formal suppers, wrote articles and appeared on television. While not conventionally telegenic he was one of the first English lawyers to appear often on television programs.


Napley was also concerned with bettering the law. He participated in law reform. He wrote about the law.


He willingly spent time to improve and serve his profession. His devotion to solicitors is best  shown by becoming the Law Society President for a year even though it meant he would have no income for that year. Not many in our current era would give up their income for a year to work for their fellow lawyers.


Napley had a happy marriage and two daughters. His children did feel he spent too much of his time on the law.


He is a good writer not afraid to express his opinion on laws, clients, fellow lawyers, judges, politicians, administrators and society. Napley has a forthright opinion on many subjects. Anyone wanting to learn more about solicitors from the 1930’s to the 1980’s in England would get valuable insight into the profession from reading Not Without Prejudice.