Up Country by Nelson DeMille 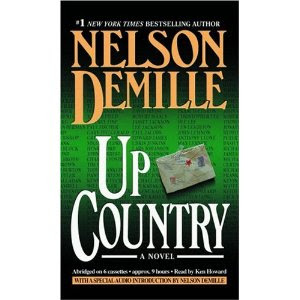 Up Country by Nelson DeMille (2002) – Paul Brenner has been shoved into retirement from the Army’s Criminal Investigation Division (C.I.D.) after the case that formed DeMille’s earlier book, The General’s Daughter. Drifting in his life Brenner is called to a meeting at the Wall, the Vietnam Memorial in , on which are carved the names of the 58,000 Americans who died during the war.


His former commander, Colonel Karl Hellmann, calls upon him to undertake a mission to . It has been 30 years since Brenner was sent to in 1968 as an infantryman with the 1st Calvary Division. Four years later he had served a second tour of duty in . During his first tour Brenner had been caught up in the battles of the Tet Offensive.


Hellmann wants Brenner to investigate an incident set out in a letter a North Vietnamese soldier had sent to his brother. The letter writer recounted witnessing in , during the Tet Offensive, an American Army captain murder an American Lieutenant. Hellmann wants Brenner to track down the witness and interview him about the event and see if he can identify the Captain. A reluctant Brenner decides to return to the land which has defined his adult life.


Brenner leaves behind a developing relationship with his former partner, Cynthia Sunhill.


On his arrival in , the former , Brenner finds that Colonel Mang, ostensibly of the Vietnamese Immigration Police, has doubts about Brenner’s claim that he is a veteran returning to his battlefields.


While there Brenner acquires an aide and traveling companion, the beautiful Susan Weber.

Trying to maintain his cover story Brenner and Weber leave . Brenner finds himself drawn into a relationship with Weber who is almost 20 years younger. After a life of short term relationships Brenner falls hard for her.


Brenner and Weber go to the A Shau Valley and the plateau on which the Khe Sanh camp was located and Quang Tri. In each location Brenner re-lives his battle experiences. In my next post on Friday I will discuss DeMille’s exploration of war.


Gradually Weber becomes a true partner in the investigation. She is clever and far better at dealing with the Vietnamese people. Brenner comes to rely on her.


As he pursues the investigation Brenner finds he has been misled by his superiors in . Further complicating the investigation are international diplomatic and business intrigues that will be affected by the results of the search.


Brenner is a dangerous investigator as he is determined to seek out the truth no matter the consequences. The journey of the present equally takes Brenner deep into his past.


The book at 702 pages is a grand historical saga wrapped around an excellent mystery.


I have not found DeMille a reliable read. On this war which was also the author’s war (he was an Army Lieutenant in ) I found DeMille brilliant. DeMille may not be Brenner but the character he created is alive on the pages.


It was a book where I was drawn forward both wanting to find out what was going to happen next in the story and to learn more about Brenner. There comes a moment for me at the end of a very good book when I pause and say that was special. I had that moment this afternoon. (Dec. 27/12)
Posted by Bill Selnes at 12:57 AM