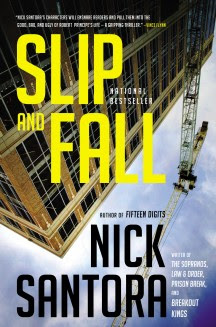 3. – 692.) Slip & Fall by Nick Santora – Robert “Prince” Principe is a Brooklyn “ham-and-egger”. It is a derisive term for a small firm lawyer toiling far from the towers filled by giant legal factories of corporate lawyer. I hate it.
While a top graduate of Columbia Law School life in the law has not been good to Prince. His one man firm barely exists. His dream of representing the legions of working men of Brooklyn in profitable personal injury cases has never materialized. He is barely paying the office rent, is often late in paying his secretary Joey and has missed too many mortgage payments on his house.
Prince does have a deft, self-deprecating wit:
There’s a saying – if you have two years to kill and nothing else to do, become a chiropractor. But then again, I guess if you have three years, you could become a lawyer.
When his lone potentially lucrative slip and fall action is dismissed and his beautiful wife tells him that she is pregnant Prince is overwhelmed by his financial problems.
Desperate to find a way to make money as a lawyer Prince concocts a scheme and contacts his cousin, Jackie, a foot soldier for Big Louie Turro, the neighbourhood leader in a Mob family. Prince knows the Mob is always eager to find a way to earn dishonest money.
With that conversation Prince slips from being a well respected member of the legal profession and falls to being a shyster. He surrenders the integrity that is at the core of our profession.
Prince comes up with a simple effective insurance fraud and the Mob swiftly provides a suitable client. He soon finds out that no one works with the Mob. It is the Mob which controls relationships.
Santora provides insights into the negotiations of personal injury litigation. Settlements are based on a give and take in which each lawyer calculates the risk of defeat. Lawyers determine the value of a claim based on the facts and law as they see them. Competing witnesses create the challenge of evaluating which facts are most likely to be found by the trial judge. The final number in a settlement negotiation is the quantification of the risk of losing for the competing parties.
It is hard for me to like a book about a lawyer who choses dishonesty when he encounters  tough going as an honest lawyer.
While I found the opening a little slow Santora did grab me when he set out Prince’s decision to join the dark side and commit fraud.
The book rushes forward with an appropriate ending. It has somewhat the feel of a T.V. series which is not surprising as Santora has produced and written shows for The Sopranos and Law & Order.
Slip & Fall is a nice easy read. I am not sure I want to read another Santora book if it is going to feature another lawyer gone bad. While I certainly recognize lawyers can be dishonest I dislike books which portray almost every lawyer as deceitful. To the contrary, almost every lawyer I know is trustworthy. I expect most readers feel uncomfortable when their profession is portrayed negatively. (Jan. 11/13)
Posted by Bill Selnes at 9:53 PM