A Lawyer’s Journey by Morris Dees with Steve Fiffer (2001) 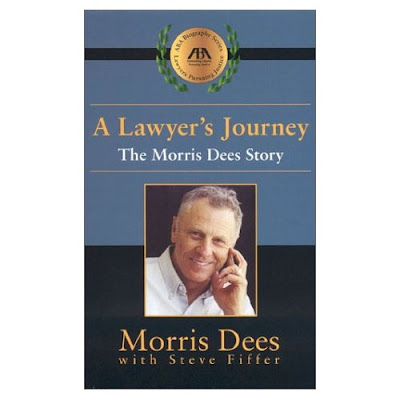 A Lawyer’s Journey by Morris Dees with Steve Fiffer (2001)– Morris Dees has led the life that idealistic young lawyers dream of at night. He has fought cases for the ill-treated and downtrodden of American society for over 40 years.


To achieve such a career he possesses a combination of skills I have never seen in a lawyer. He has been an accomplished businessman seeing opportunity and building a multi-million dollar company. He has elite courtroom skills both understanding how to build evidence, question witnesses and assemble evidence. He has a passion for practical social justice.


Many people have a desire to help the disadvantaged. Some will devote some of their time to causes. Fewer yet will give up making large amounts of money for themselves.


stands alone in using his talent for making money to finance the non-profit Southern Poverty Law Center and his legal skills to lead teams fighting the cases taken on by the Center.


was born to a farm family in 1936 at , . His parents got by, but farming, as it always has been, was a struggle. In a time where the South was rigidly segregated and African Americans treated as inferior his father, also Morris, had respect for black people that was uncommon. In a striking story says that he can only recall two whippings from his father and the first came when he was five for speaking disrespectfully to a black worker on the farm. His father’s actions and attitudes brought to mind the fictional Atticus Finch of To Kill a Mockingbird, another rural Alabama father raising his children at the same time to think differently about issues of race and how to treat people. grew up 100 miles from Harper Lee’s hometown and spoke of his identification with Lee’s characters in an article he wrote on the 50th anniversary of the publication of To Kill a Mockingbird.


Lest readers think was not truly of the rural his nickname of “Bubba” clearly defines his place and time.


When reading biographies of lawyers I inevitably compare my life with their life both before and after they became lawyers.


said his father pushed him to become a lawyer and not be a farmer. As a young man wanted to farm and preach the Word of the Lord. His father, having struggled to make a living, wanted a better life for his talented son.


I also grew up on a small farm. It was a good life, economically better than some of our neighbours, but far from financially secure. My parents did not push me to be a lawyer but encouraged me to consider options outside the farm. I expect they realized before I did that my skills were not well suited to farming.


Where differs dramatically from my life is his entrepreneurial skill, even as a teenager. Where I was content simply helping on the farm built his own farm business. By the time he was finished high school in 1955 he “had five thousand dollars in the bank fifty head of cattle, and about two hundred hogs on the farm waiting to be sold”.


While decided there was no future for him on the farm I am sure he would have been just as successful farmer as he was businessman and lawyer. His flair and talent to recognize opportunity would have served him well on the farm.


Those skills were to enable him to carry on successful businesses in university and as a young lawyer.


is uncommon is his decision to stop making more money for himself and devoting himself to being a lawyer for those who cannot afford lawyers. gained millions of dollars from the sale of his business which gave him financial stability to pursue justice for the poor.


He then used his money making ability to effectively fund raise for the Southern Poverty Law Center.


I marvelled at finding the means to be an advocate for the poor while having an upper middle class lifestyle. I have worked on cases for hemophiliacs, blood transfused, Indian land claims and gay pension benefits but always my firm and I had to balance what we could do against generating enough money. I admire for finding a way to not have to make such compromises.


In my next post I will discuss some of the cases and causes writes about in his autobiography.
Posted by Bill Selnes at 11:25 PM