The Rising by Brian McGilloway 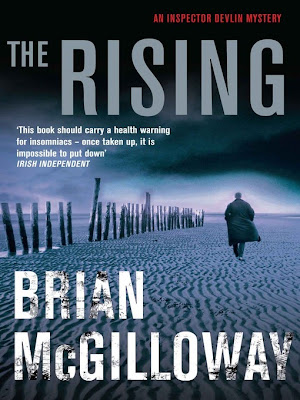 The Rising by Brian McGilloway – Garda Inspector Benedict Devlin is called out at 4:30 in the morning to investigate reports of gunfire. As he nears the area he sees it is a fire on a farm. At the farm he finds a barn burning. Rushing into the building he rescues an elderly man. Returning to try to find a young man he is trapped by falling debris and almost killed.


The next day Devlin learns the old man has died and the young man in the barn was murdered. While the young man’s body is badly burned they are able to identify the corpse as Martin Kielty, a local drug dealer.


In conversation with Elena McEvoy, his girlfriend, Devlin learns that Kielty had received a Mass card with a bullet in the card. It is a message of threat and warning familiar in the area from the Troubles.


Devlin is stationed in Lifford, an area of Ireland adjacent to Northern Ireland. The residents go back and forth across the border. The region has seen its share of violence. While peace has come some of the para-militaries have little interest in peaceful pursuits.


Kielty has property on both sides of the border giving him convenient bases for his drug dealing. Devlin and other officers work on Kielty’s relationships in the drug world.


A group have formed a group called The Rising to challenge drug dealers in the area. Their primary forms of advocacy are intimidation and assault.


At home Devlin, having spent too much time working, is not able to recognize that his children, especially 11 year old Penny are growing up. She is no longer a little girl. While his wife, Debbie, understands Penny’s need to go out Devlin exerts a tight rein upon his daughter. His concerns with the parents of a boy she likes cause a rift in the family.


In the midst of the investigation Devlin is called by former colleague, Caroline Williams, whose son, Peter, has disappeared while camping with friends on the coast. Devlin joins the search for Peter. A text from his phone buoys Williams. It turns out to be a cruel hoax.


Devlin pursues his investigation into Kielty’s death gradually penetrating into the drug dealing world along the border.


The Rising is led by vigilantes too comfortable with violence. Devlin finds it hard to believer their motives are pure.


Back home Devlin is adrift as he tries to understand the needs of an 11 year old girl. An area not touched upon often in crime fiction is the damage to relationships with children for police officer parents who spend excessive time pursuing crime.


The late Maxine Clark considered The Rising an excellent book. I agree the author is a good writer. The plot proceeds smoothly. The pages turn easily. I would not call it a great book. It is a comfortable book. While drugs and murder are not comfortable topics the story flows well. It was interesting to read of the challenges to para-military men reluctant to adjust to a new world of peace. Violence has been their way of life and solution to problems.
Posted by Bill Selnes at 8:56 PM