Government Powers in Our Times and The Kill Room 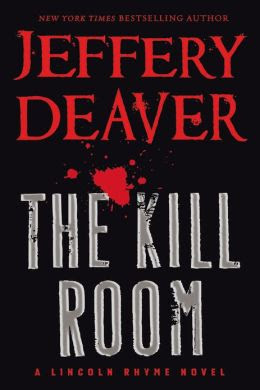 Jeffery Deaver in The Kill Room goes into major contemporary issues that are not often dealt with in crime or thriller fiction.


This post does not directly involve spoilers but it does have more information about the books discussed than some readers may want to know about the books.


As set out in my review the criminal investigation involves the death of an expatriate American, Roberto Moreno, who is executed in a hotel room in the Bahamas by an American intelligence services drone airplane. What is the authority of the United States to kill its citizens or non-citizens without due process of law?


In an age where threats of terrorism and actual acts of terrorism occur what rights do governments have to pre-emptively kill those they believe will harm their citizens?


In Fool’s Republic by Gordon W. Dale which I reviewed 2 years ago the protagonist, Simon Wyley “has been cast into one of America’s new secret prisons where those persons, the authorities fear threaten her security, are held captive without rights”. Interrogators seek to break Wyley to get the information they want from him.


In my review I discussed the dangers of abandoning the Rule of Law:


Recently I was in Germany where I spoke with a German lawyer about the Nazi takeover of his country. The Rule of Law was thrown aside when the Nazis perverted the German judicial system. He expressed unease over the development of secret courts in the United States. I stated it was America’s public courts that restrained the legal excesses of the internal War on Terror. He remained concerned for America’s future when confidential charges and proceedings become part of the judicial system.


A year earlier I had reviewed Crossing Hitler by Benjamin Carter Hett. The book discussed the actions of a courageous German lawyer:


Hans Litten was a radical Berlin defence lawyer in 1932, acting as a private prosecutor with the public prosecutor, helping prosecutor SA storm troopers charged with attacking Communists partying at the Eden Dance Palace. Litten convinced the Court to summon Adolph Hitler to testify about the SA. Litten carefully crafted questions that challenged Hitler to reconcile the Nazi Party’s public proclamations of pursuing power only by legal means with the SA taking violent actions in the streets of Germany. Litten’s probing questions provoke Hitler into a profound rage.


In The Kill Room the good guys and the bad guys, with blurring on both sides as to character, use modern data mining techniques of the American Federal Government, often with no official authorization.


A vast increase in the power of police and intelligence agencies to investigate and surveil American citizens and non-citizens has taken place since the terrible events of 9/11. In the years after 2001 crime fiction dealt with these new powers.


Lost Light by Michael Connelly in 2003 was the first book I read involving these issues. Harry Bosch, in the interval when he is retired from the LAPD, finds out during a murder investigation how much power has been assumed by the anti-terrorism units of the FBI.


A year later, V.I. Warshawski, in Blacklist by Sara Paretsky explores issues involving the treatment of American Arabs and goes back 50 years to the McCarthy hearings on Un-American Activities.


Outside North America John Le Carre has dealt with the new world of intelligence in such books as Mission Song. In that book Congolese interpreter Salvo learns of the duplicitious nature of the English and other Western intelligence agencies while translating secret recordings of private conversations.


While this post reflects my concern with the actions of intelligence agencies apparently beyond the supervision of legislative bodies and courts I recognize that in an age of terror governments must have swift means to prevent and react to terror. Having been a criminal defence counsel and a lawyer for plaintiffs taking on big government and large corporations I am uneasy about abuses of the power entrusted to the intelligence services of our times.
Posted by Bill Selnes at 5:53 PM