"V" is for Vodka Doesn’t Freeze by Leah Giarratano 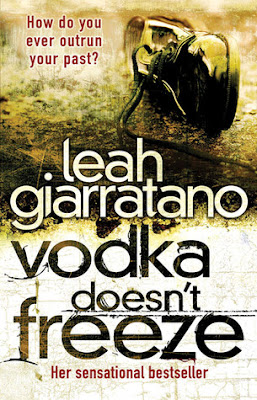 "V" is for Vodka Doesn’t Freeze by Leah Giarratano – For the letter “V” in the Crime Fiction Alphabet meme hosted by Kerrie Smith on her blog, Mysteries in Paradise, I have read a book from Kerrie's homeland, Australia.


Sgt. Jill Jackson of the Sydney Police is assigned to investigate the murder of a man found in some brush on a cliff overlooking a pool frequented by children. It is instantly apparent to the Police that he was a paedophile.


There is no regret in the police that he has been killed. Some officers would prefer not to aggressively investigate a murder of a man they despise.


On her return home Jackson, thinking of the investigation, suffers a panic attack as she remembers being kidnapped and brutalized as a child by her captors. When she comes home she obsessively checks her house to be sure there are no intruders present.


Clinical psychologist, Mercy Merris, is unraveling. She has spent too much time counseling the victims of paedophiles. The private clinic where she works has unsuccessfully attempted to get her to restrict her practice


In her police unit Scott Hutchison, a big bluff outgoing man is Jackson’s partner very supportive of her. Her nemesis is Elvis Calabrese a big, overweight offensive man. Each is almost a caricature. I do not make light of the challenges of women in police services but there is no subtlety to these men.


In a review of outstanding cases Jackson notes a pair of murders of men in the Sydney area. It does not take long to determine someone is killing paedophiles.


Much of the book focuses around paedophiles and their connections with each other. Reading about them is difficult, often repellent. In reading the book I wondered whether they could be anything but evil in fiction. Could a writer show any aspect of their lives in a positive way?


I admire Giarrantano for writing about a mystery involving paedophiles. I doubt there is a harder subject.


With the investigation turning into the hunt for a serial killer Jackson is conflicted about diligently pursuing the killer. Should the police go after a vigilante eliminating men who hurt children?


At the heart of the book for me was the question whether a paedophile can be a victim if he is murdered? Does the predator become victim when murdered?


I thought of Michael Connelly’s character, Harry Bosch. For 20 years he has lived by the motto that everyone matters or no one matters.
Michael Connelly, on his website, has an interview from 2002 between himself and his character, Bosch. In that interview Bosch explains his philosophy:
HB: Look, I’ve always said that everybody counts or nobody
counts. I choose the former over the latter. Everybody counts.
That goes just as much for the boy on the hill as it does for every
person that was in the World Trade Center or in the Pentagon or
on those planes. I’ve never had a problem keeping my eyes on
the prize. Not this case or any of the others before it.
Bosch will not value one person’s life over that of another person. He is widely admired for his commitment to all victims. By this creed the murder of a paedophile is the same as the murder of any other person.


If we decide victims can only be good people we play God on whose lives and deaths have worth.


To her credit Jackson seeks out the killer. She is a true officer enforcing the law rather than making judgments on whose deaths deserve her efforts to solve their murders.


Publishers are squeamish about the issue of murdered paedophiles as victims of crime. On the back cover they would far rather talk about Jackson seeking out living paedophiles participating in a ring than her responsibilities as a homicide detective to find a murderer of paedophiles.


If you like Hollywood you will enjoy the ending to the book.


I was glad I read the book. It did leave me disturbed and thoughtful. I expect it will be some time before I read another book focused on paedophiles. (Aug. 25/13)
****
My connection to this book comes from spending time in Sydney three years ago while my son was on a university exchange to that fine city.
Posted by Bill Selnes at 11:21 PM