“Y” is for The Shaman’s Knife by Scott Young 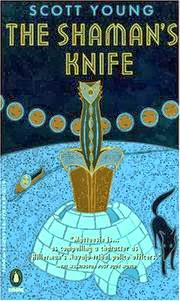 “Y” is for The Shaman’s Knife by Scott Young (1993) – The second Matteesie Kitologitak mystery is a brilliant trip into the far North of Canada.


Matteesie has just arrived home in Ottawa from a trip to Labrador when he receives a call that a double murder has taken place in Sanirarsipaaq and his 90 year old mother, Bessie Apakaq, has been injured. She has been medivacked to Yellowknife.


On the difference in surnames Matteesie explains:


The Inuit system of more or less picking our own surnames baffles some people, especially the whites, but it’s one of our traditional ways that we’ve been able to hang onto. It’s not based on patronymics, like in Russia, or matronymics, if that’s a word, but simply allows the individual to take the name he or she wishes.


It is one of but many lovely little examples of Inuit life.


As Matteesie finishes the call advising he is on his way to Yellowknife his wife, Lois, overhears the conversation and makes a rude remark about “the bloody North” not realizing the trip is to go to his stricken mother and then fly to Sanirarsipaaq to investigate the murders. It is a painfully awkward moment when Lois learns about her mother-in-law being injured, a woman she met early in their 20 years of marriage and has not seen again. Matteesie says Lois “apparently didn’t really warm to a toothless old Inuit woman with a tattooed face and only one eye”.


In the North, Aunt Bessie is a much loved woman who loves to travel from one family group to another, the nomadic spirit still strong in her.


On arrival in Yellowknife Matteesie finds his mother gravely injured but stable. She had been knocked aside by the killer fleeing the house in which the murders were committed.


Matteesie receives long distance comfort from Maxine, the Inuit woman with whom he has had an affair almost as long as he has been married.


After Bessie stabilizes he travels to Sanirarsipaaq on the Arctic coast. The case gains widespread publicity when there is a suggestion that there are shamanistic aspects to the murders.


Even though it is officially spring in southern Canada it is still winter in the Arctic. For a snowmobile trip out of town he readies himself in case the weather changes:


Most of my heavy-duty cold wear had flown with me from Labrador last Monday. The rest I’d borrowed from Bouvier. I had on a thermal shirt next to my skin, down vest, pants of caribou hide with rubber bottoms, winter parka, fur hat and googles …..


Northerners learn to respect the weather.


Once in the small Arctic community he returns to the life of his youth where the residents make their living from the land hunting and trapping.


Comfortably settled into the local hotel Matteesie commences his investigation with the aid of Corporal Bouvier.


The deceased, a young man and his mother, have been brutally knifed to death. There is blood everywhere.


Forensic examination shows several types of footprints – some in the blood and some prior to the killings. I could not help but think they needed Napoleon “Bony” Bonaparte to help them study the footprints.


Matteesie is a dogged investigator. He neither has brilliant deductions or swift insights into the evidence. He carefully proceeds with assembling the evidence.


He considers the local shaman, Jonassie Oquataq, a famed Inuit carver and sculptor. Matteesie thinks of the role shamans have traditionally taken in the North.


As the investigation proceeds the reader is fully taken into the life of an Inuit village far above the Arctic Circle.


There is little doubt about the killer but can Matteesie build a case?


The Shaman’s Knife is an excellent book. I was left regretful at the end that Scott Young wrote no further mysteries featuring Matteesie and the people of northern Canada. It would have been a memorable series. (Sept. 24/13)
****
Last year my entry for “Y” in the Crime Fiction Alphabet hosted by Kerrie Smith at her blog Mysteries in Paradise also featured Scott Young in the following posts:


****
My connection to the book comes from its setting in Canada and the author being a Canadian. My next post will contain some further observations on life focusing on modern travel in the North.
Posted by Bill Selnes at 10:57 PM