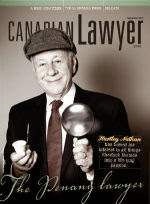 Canadian Lawyer magazine in its September of 2013 issue featured an article on Hartley R. Nathan, a Toronto lawyer at Minden Gross LLP, who is a devout Sherlockian. The cover photo shows Hartley ready for action.


After reading a two volume set of Holmes in 1971 he attended a gathering at the Toronto Central Library where there was a series of lectures on crime fiction. The library had acquired a significant collection of Arthur Conan Doyle’s work.


At the lecture there was passed around a sheet to sign up if an attendee was interested in forming a Sherlock Holmes Society. He joined up. The new group named themselves the Bootmakers of Toronto because:


The group’s name is derived from the Hound of the Baskervilles (Nathan’s favourite) in which Sherlock Holmes pulls a boot out of the Grimpin Mire and inside he finds the words: “Meyers, Toronto.”


Soon after Hartley recruited a friend and fellow lawyer, Cliff Goldfarb, to join the Bootmakers.


They have jointly written 9 papers on the Jewish connections of Holmes. Most recently they have written a book Investigating Holmes – The Jewish Connection and Other Inquiries.


Cliff has contributed to preserving and honouring crime fiction by founding the Friends of Arthur Conan Doyle Collection at the Metro Toronto Reference Library. Their website is http://www.acdfriends.org/index.html.


The origins of the Arthur Conan Doyle collection at the Library are set out on the website:


The Collection was started in 1969 with the purchase of over 150 volumes, part of the estate of Toronto collector, Arthur Baillie, and a lot of over 1500 items from Harold Mortlake of London, England. In 1970, the Library acquired an extensive collection of Sherlockian ephemera from Toronto collector Judge S. Tupper Bigelow.


Over the years the Collection has grown with the purchases and donations of a many items, including numerous editions of Conan Doyle's Sherlockian and other published works, several of Conan Doyle's letters, a copy of Beeton's Christmas Annual for 1887, which contains the first appearance of Sherlock Holmes in print, and the manuscript of Conan Doyle's unpublished play, Angels of Darkness.


Hartley’s Sherlockian fervour led the Baker Street Irregulars of London to invite him to join them under the name of the Penang Lawyer. The name was chosen because of his occupation:


It is a reference from the Hound of the Baskervilles when
the story opens with Holmes and Watson examining a
walking stick called a Penang lawyer.


In his legal practice Hartley has focused on corporate law and has written well respected texts such as Nathan’s Company Meetings.


His research and writing about detective fiction are discussed in the article:


While Nathan enjoys the detective work involved in uncovering details about literary characters, he prefers his chosen field of the law over any aspirations to become a sleuth himself. “I like the research because you learn a lot about history and it’s not that different from researching legal papers,” he says. “You need to find an interesting topic, you have to go through the cases and consider the arguments on both sides. I admire the different detectives portrayed in the various stories, but I don’t think I have those qualities. In writing about literature you have to make sure your scholarship is right in the same way you research a legal problem. I found my legal training to be very useful.”

You have to love a lawyer who, outside his office on the 21st floor of a downtown Toronto office tower, has a small ceramic plaque bearing the number 221B.
Posted by Bill Selnes at 10:58 PM