In my last post I set out my induction into the Football Reporters of Canada wing of the Canadian Football Hall of Fame last Sunday morning.


In late afternoon I took the media bus to Taylor Field where the Grey Cup game, the championship of the Canadian Football League, was being contested between the Saskatchewan Roughriders and the Hamilton Tiger Cats.


Saskatchewan has hosted three Grey Cup games but this was the first time the home team, the Roughriders, had played for the Cup in their own Stadium.


My thoughts on the game are set out in the column I wrote which can be found on the Melfort Journal website at http://www.melfortjournal.com/2013/11/25/surreal-sunday. 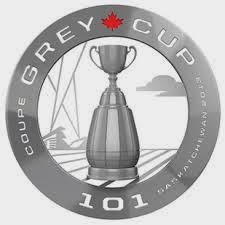 The level of excitement in Saskatchewan over the Rider victory has never been matched in our history.


It has become a tradition, better described as a superstition, for professional football players not to touch the Grey Cup unless they have won the Championship. (The same tradition applies in hockey for the Stanley Cup.)


After winning the Cup it is a happy tradition for the winning team to drink from the Cup and the Riders were certainly following that tradition in their dressing room after the game.


As with most Canadian sports fans I believe having a cup for the winner is much better than the sculptures used as trophies by the NFL and Major League Baseball. Drinking from a Cup is far more a celebration than getting your photo taken holding the trophy.


The winter will not be as long in Saskatchewan with the Riders winning the Cup.
Posted by Bill Selnes at 10:50 PM