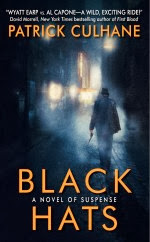 A few years ago I enjoyed seeing Max Allan Collins at Once Upon a Crime bookstore in Minneapolis. The event inspired me to read Black Hats.

****
42. - 452.) Black Hats by Patrick Culhane – When Sharon and I were in Minneapolis a couple of weeks ago we went to the Once Upon a Crime bookstore to see Max Allan Collins talk about writing. He wrote this book under his pseudynom. Collins writes mysteries (alone and with collaborators who include his wife and under the pseudynom), screenplays, graphic novels (Road to Perdition) and comic books. He is also a move director. He said he can write a novel in 2-3 weeks when he starts actually writing. He said he did not know how many books he had written.

I was captured by the premise of the book – aging Wyatt Earp confronting Al Capone in 1920 in New York. I had never realized that Earp lived until 1929. In the book he goes to New York to help Doc Holliday’s son, Johnny, who is operating one of the first speakeasies. Johnny has been threatened by the Italian gang of which Capone is a member. In New York Earp joins up with Bat Masterson who in fiction and real life became an early 20th Century sportswriter in New York. The spoken language has a convincing Western flavor. The story is well done. It does not have the many twists of some stories. The violence is limited. Earp is no saint but he is a hero. It was a satisfying honest story. It may be one of the year’s most interesting because of its historical theme. Paperback. (Oct. 12/08)
Posted by Bill Selnes at 11:29 PM