“V” is for Vengeance by Sue Grafton 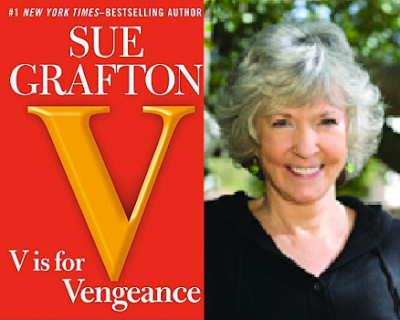 “V” is for Vengeance by Sue Grafton – As the end of the alphabet nears Kinsey Millhone turns 38 in the 22nd book of the series.


Life and work are in a routine period when Kinsey gets caught up in a shoplifting scheme at a local Nordstrom’s store. While she is paying for a selection of bargain undies she advises the clerk she has observed another woman stealing clothes. As the store staff close in on the shoplifter Kinsey realizes that another woman she had seen with the shoplifter is also stealing clothes. Kinsey sets out in pursuit and is almost run down for her trouble.


Because of her innate curiosity, better described as nosiness, Kinsey watches the paper for a story on the first shoplifter who was caught and arrested. She is startled when she is told the woman, Audrey Vance, died shortly after being released on bail from a fall off a bridge over a ravine. Her death is assessed by the police as a probable suicide.


After relating the circumstances to William Pitt at Rosie’s, he insists they go to the visitation of Audrey. Brushing aside her reluctance to intrude on the bereaved William says they will be glad of the comfort the presence of Kinsey and William will bring to the family.


William a professional hypochondriac is also an accomplished attendee of visitations and funerals taking in one or more every week. He says they will describe themselves as distant acquaintances should someone be so gauche as to ask. He assures Kinsey his experience from a multitude of funerals can help the family with the special grief of a suicide.


Kinsey meets Audrey’s fiancée, Marvin Stryker, at the funeral home. William advises Marvin of Kinsey’s work as a private investigator. She is surprised, but not shocked, when he hires her to find out more about the death. He believes it was no suicide.


The investigation takes Kinsey into the realm of organized shoplifting. It is a world of which I had little knowledge before reading the book. It appears to be a local industry in southern California.


Detective Len Priddy, who worked with her first husband, is dismissive of Kinsey’s investigation which spurs her to even greater efforts.


The book features a bad guy, Lorenzo Dante, who is portrayed more subtly than most current bad guys. He has a family. He loves his ailing uncle and provides care for him. He is in a long term challenging relationship. He is reflective about his life. In our current era of crime fiction I have come to appreciate authors who create multi-dimensional bad guys.


The book was much different from “U” is for Undertow in that many of the characters were likeable people. I acknowledge that I find myself slogging if a book lacks likeable characters.


I enjoyed the book more than some of the more recent books in the series. Unlike “T” is for Trespass I did find there was limited suspense as the conclusion neared. There was a sense of inevitability rather than drama as the book was coming to an end.
Posted by Bill Selnes at 12:37 AM