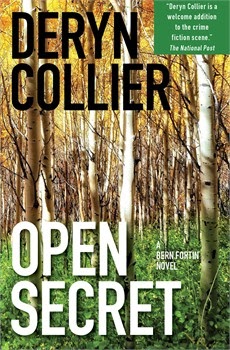 Open Secret by Deryn Collier – In the fictional town of Kootenay Landing in the southeast corner of British Columbia, just north of the American border, Bern Fortin is the coroner. Retired from the Canadian Forces where he was a Lieutenant Colonel who saw duty in Rwanda, Bosnia and Afghanistan, Bern is afflicted by the traumatic events, especially Rwanda, which he witnessed and sometimes participated.


Cindy Johns is an aboriginal girl growing up a generation ago near Kootenay Landing in horrific family circumstances.


Cindy’s story and some of Bern’s past are provided in a series of flashbacks.


Gary Dowd, a bookkeeper in a local company, has secrets from his youth that have affected his marriage with Michelle.


Michelle and her parents are even more disturbed by the trauma of a family tragedy.


Dr. Juniper Sinclair is a beautiful harried doctor with too much work and too many people to care for in town with not enough doctors.


Constable Maddie Schilling of the RCMP is struggling with debilitating cramps. Too early for her period she finds relief in a locally made topical cream. She also struggles with low self esteem as she compares herself with trimmer, more classically lovely, women.


Sitting against a rock ledge, enjoying the beauty and stillness of the fall mountain scenery, Bern hears a rifle shot. Instantly dropping behind the ledge he instinctively reaches for his military rifle. Finding none there he returns to the reality of the day. Calming himself he goes down to the marshy area where the sound of the shot came from and finds Seymour Melnychuk mortally wounded.


Dr. Sinclair is desperately tries to save him giving mouth to mouth resuscitation but Seymour is soon gone.


Seymour, an associate of the Hell’s Angels, had grown up with Gary and just spent some time at Gary’s home.


Seymour’s presence back in Kootenay Landing has caused fear, even terror.


No one will mourn his passing but who killed him.


Bern assists Constable Schilling as she probes the relationships of the characters and looks for connections.


The effects and uses of marijuana are featured in ways I had not expected.


Collier does a good job of creating a realistic fictional community. Her descriptions of the mountainous country are striking even lyrical.


I wanted to like the book a lot. It is set in rural Canada. It had an intriguing murder. Yet it did not work well for me.


I found the characters depressing. While I would find unbelievable characters whose lives were all sunshine I found these characters dominated by troubled pasts. I expect those readers who like their characters dark in spirit will like the book.


I found the plot moved slowly for me. Ordinarily I appreciate authors fleshing out relationships and providing backgrounds but I did not find the pace of Open Secret quick enough for me.
I thank Simon & Schuster for providing me with a copy. Open Secret will be released on April 8. It is the second book in the series. Blog readers may remember I participated in a cover reveal last year for the book.

Open Secret is the 10th book of 13 for this year's Canadian Book Challenge which ends on July 1, Canada Day. The Challenge is hosted at the Book Mine Set blog.