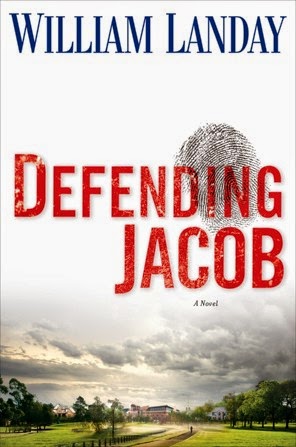 Defending Jacob by William Landay – Andy, Laurie and Jacob Barber live in Newton, Massachusetts just outside Boston. Andy is the top Assistant District Attorney in the city. Laurie is a former school teacher. Jacob is their 14 year old son. They are a conventional American middle class family. After Ben Rifkin, a classmate of Jacob, is stabbed to death they will long for a return to an average routine life.


Andy takes on the Rifkin murder as usual in his 1st ADA position. It is not a wise decision. With his son attending school with the victim and Andy personally knowing the Rifkin family he should have stepped back.


Initially there is no suspect. Though the murder happened in a public park just before 8:30 in the morning there are no eye witnesses and the forensic evidence is limited.


Andy wants to focus on Leonard Patz, a local pedophile, though Patz has never been violent in encounters with boys. Andy wonders:


I studied the mug shot. I had a feeling about Patz right from the start. Of course, I was desperate – I wanted to feel that feeling, I badly needed a suspect, I needed to produce something finally – so I distrusted my suspicion. But I could not ignore it all together. You have to follow your intuition.”


His concentration on Patz appears intended to draw attention away from Jacob when evidence is found directly implicating Jacob.


Jacob’s fingerprint is found in blood on Rifkin’s clothing and a friend of Jacob, Derek Yoo, posts on social media that Jacob has a knife.


Jacob is swiftly indicted and the Barber family is thrust into the agony of defending Jacob in a highly public American murder case.


Overnight Andy moves from highly respected ADA to the tainted father of a murder suspect. He does not handle the transformation well. He has spent his life prosecuting “scumbags”. Now his son is the accused.


Every legal tactic and stratagem will be used in the defence of Jacob:


Most of the judges in Cambridge had the same reputation: soft, unrealistic, liberal. Now it seemed perfectly appropriate to load the dice that way. A liberal, it turns out, is a conservative who’s been indicted.


I love the last sentence. It reflects many conservatives I have known.


The family hires Jonathan Klein, a solid well prepared realistic defence counsel, who will guide them through the case.


Neal Logiudice, 2nd ADA, whose ambitions range far beyond replacing Andy as 1st ADA, is assigned the prosecution. Logiudice is competent but far too personal in his prosecution.


As the case proceeds there is an ambiguity concerning Jacob that reminded me of the uncertainty with regard to Rusty Sabich in Presumed Innocent and Innocent by Scott Turow. Landay does not provide the reader with the easy certainty of guilt or innocence. Readers are left to weigh the evidence.


It is a thoughtful book that was an uncomfortable for book for me both as a lawyer who is a parent and as a defence lawyer.


Having raised two sons, reading of parents coping with a son charged with a major crime, reminded me of every father’s secret fears that his teenage boys will get in trouble. I am grateful my sons have done well in life. For a lawyer parent there is a special discomfort as every trial lawyer sees young people who have committed crimes their parents cannot fathom.


As a defence counsel there is a heavier burden to defending teenagers. Families are closely involved in the cases. A life future is at stake.


I was glad I read the book. I cannot say I enjoyed a book that made me so uncomfortable. I regretted the ending. It veered away from the challenging conclusions of Turow’s books. I will read Landay again. (Apr. 27/14)
Posted by Bill Selnes at 10:30 PM