A Serpent’s Tooth by Craig Johnson 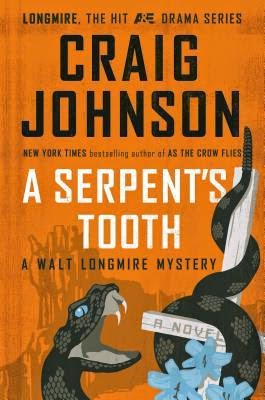 A Serpent’s Tooth by Craig Johnson – A quiet day in Durant, Wyoming becomes interesting when Sheriff Walt Longmire and Undersheriff, Victoria Moretti, go over to the house of 82 year old widow, Barbara Thomas, to investigate what angel has been doing chores and repairs for her.


They startle a 15 year old boy repairing the sink. In a desperate attempt to escape he knocks over Vic banging his knee against her nose and giving her a pair of big black eyes. Captured later that afternoon on the school playground he is taken to the jail where the police eventually learn his name is Cord.


He has extensive knowledge of the Bible often using Biblical quotes in conversation. From a Book of Mormon found in his cache near the Thomas house the police conclude he is a member of a splinter group of the Church of Jesus Christ of Latter Day Saints.


While apparently of normal mental development Cord is curiously naïve. Everyone at the detachment is startled when, Cord, given a video of the movie, My Friend Flicka, is absolutely entranced. It is clear he has never seen T.V.


Not wanting to turn him over to child care services, Sheriff Walt decides to go to western South Dakota where a sect of polygamous Mormons has taken up residence that it appears Cord had been a member of the group. The Sheriff learns Cord’s mother is missing. He is sure she has been killed.


Prior to the trip Walt ventures down to the southern edge of Absoraka County where a group from the same sect has purchased a ranch. In a bar at Short Drop near the ranch Walt has a tense confrontation with members of the sect.


After getting to South Dakota Sheriff Walt is introduced to Vann Ross Lynear, patriarch of the sect. He has been working in his backyard for 55 years building 12 spaceships, each named for one of the 12 tribes of Israel, to take his followers to the 12 planets reserved for them when the Rapture occurs. He explains to Sheriff Walt that no engines are needed for the spaceships as they will be propelled by divine celestial power.


Later at the ranch there is a standoff between Sheriff Walt and a truckload of teenagers that ends poorly for the teenagers.


On returning to Wyoming the Sheriff meets up with a grizzled elderly man who has a massive beard and hair down below his waist. He says he is Orrin Porter Rockwell,  “Danite, Man of God, Son of Thunder, and the strong right arm of the prophets of the Church of Jesus Christ of Latter Day Saints”. The original Rockwell was one of the early adherents to the Mormon faith and became a fierce and violent defender of the church. Sheriff Walt is skeptical of his identity for it would make Rockwell almost 200 years old. He says he has lived almost two centuries as he was touched by the prophet, Joseph Smith, and given eternal life. Sheriff Walt places him in cells with Cord. The staff are equally amused and surprised when Rockwell loves My Friend Flicka as much as Cord. It appears the ancient Mormon has as little experience with T.V. as Cord.


Sheriff Walt, with the aid of Vic, searches into the pasts of Cord and Rockwell. At the same time he is wondering why the sect, the Apostolic Church of the Lamb of God, has bought a ranch in Wyoming and what is their economic base. How are they sustaining themselves?


There is not much mystery about the killers. The story is about the investigation.


It was a book for which I have mixed emotions.

I enjoyed the introduction into the storyline of the expansion of the polygamous Mormom sects in the American West. Where do they fit in our current society?
The characters were fascinating. Orrin Porter Rockwell is a character to long remember.


However, Sheriff Walt is in danger of becoming the stereotype of the lone American lawman riding, now driving, into bloody confrontations with the bad guys. In earlier books the Sheriff was more balanced. His keen intelligence is little utilized in this book as he barges around from fight to fight. It reminds me of the later Spenser mysteries when violence became the first option to solving issues.


The ending was strained to me in set up and execution. Hollywood endings were not utilized in most of the earlier books. I am uneasy Johnson is going to be writing books about the iconic lawman personally overcoming evil with a trail of bodies in front, beside and behind him.
This book still has enough characters and complexity to make me read it quickly but I hope the bullet and the fist does not become Sheriff Walt’s preferred method of policing the New West.