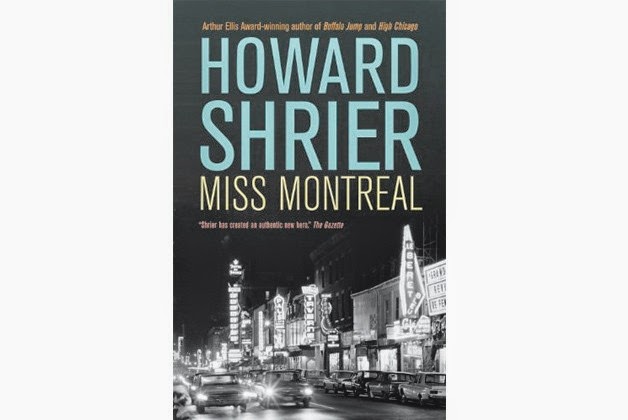 Miss Montreal by Howard Shrier – The fourth Jonah Geller mystery is set entirely in Canada. The first three books had involved Canada and the United States.


Jonah is hired by 83 year old Arthur Moscoe to find out who killed his grandson, Sammy Adler, in Montreal. It was a brutal murder. Sammy had been beaten to death. Moscoe is dying in Toronto and cannot bear just waiting for the police to investigate the murder.


Sammy was the same age as Jonah and they attended Jewish summer camp as pre-teens. For a climatic summer ending toss ball game, when they were 12, Jonah works with the un-coordinated Sammy to create a decent swing. The result is a nickname for life – “Slammin’ Sammy”.


As an adult, Sammy moved to Montreal where he became a journalist gaining fame within the City for his insightful, often funny, columns on city life.


Jonah travels to Montreal with Dante Ryan, the former organized crime hit man, who provides support and gun protection for the unarmed Jonah. His actual partner, Jenn Raudsepp, is recovering from injuries received in their last case in Boston.


To ensure they have enough firepower for any situation Ryan takes the following with them in his special case for transporting guns:


His had foam cut-outs that matched his .22 target pistol and its suppressor; the favourite of his Glocks, a G22 that carried only fifteen rounds, as opposed to the usual seventeen, but fired .40-calibre bullets that blew bigger holes in the target, the compact version of the Baby Eagle; an army-issue Beretta that’s his throwaway if needed, and the one I think of as his persuader, a chrome Smith & Wesson revolver with an eight-and-three-eighths barrel, long enough to churn butter or a man’s insides.


Ryan is also a guide to Montreal. While Jonah spent time there in university Ryan grew up in the city.


Holly can provide no leads. While Sammy annoyed some people, especially in authority, he did not create enemies with features and his columns. With regard to columns Holly tells them:


There’s an old newspaper saying about columnists,” she said with a sad smile. “They come out on the field when the battle is over and shoot the survivors. Sammy waited for the reporters to dig the dirt, do battle, then he commented. Put into his perspective.”


Jonah seeks information from the investigating detectives. Reynauld Paquette allows  Jonah to struggle with his limited French for a few minutes before ending the language humiliation and switching to English. His partner, Rene Chenêvert, refuses to talk to him in English.


Knowing Moscoe has authorized Jonah to use Moscoe’s team of lawyers to take court action to gain police information the detectives grudgingly supply some documents.


Jonah and Ryan start to explore the last pair of features Slammin’ Sammy was working on when he died.


One was a story about Afghani immigrants adapting to Canada and succeeding in their new land. It was to be a counterpoint to a recent story of an “honour” killing within a Canadian Muslim family.


The other was about a new provincial party, Québec aux Québécois, which is a nationalist party with strong opinions on immigrants, especially Muslims wanting a conservative Muslim lifestyle.


It is the book I wish Shrier had written in the first two of the series - Buffalo Jump and High Chicago. While I liked those books I doubted I would read another book in the series because of a level of violence I found excessive for the story.


In Miss Montreal the violence is less and the plot is more. Jonah is still hard boiled but the streets of Montreal are not layered in bodies.


It is excellent crime fiction. My next post will delve into the societal issues addressed in the book.
****
Miss Montreal is the 3rd book of the Arthur Ellis shortlist for Best Novel in 2014. Once again it was not the winning book but it is certainly worthy of the shortlist. It becomes the 14th of the 13 books I have read since last July 1 for the 7th Canadian Book Challenge.