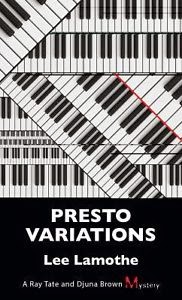 Presto Variations by Lee Lamothe – Lazlo “Marko” Markowitz has a big problem. Working with his Colombian supplier, Pavo, the drug business in Detroit has been too good. He now has a stash of $10,000,000 most of it Pavo’s money. To get the money laundered he needs to get it across the border to Toronto where Pavo has a cousin who will deal with the money.


With border security heightened as part of the war on terrorism it is getting harder and harder to transport money into Canada. There also appear to be rats around Marko informing the authorities of his cash runs.


His latest courier, Abner Hussey, was stopped just before reaching the border by officers Ray Tate and Djuna Brown. Hussey had $200,000 in envelopes taped to his body.


Detectives Tate and Brown, lovers as well as partners have just returned from an escapade in Paris that was funded with an unauthorized Michigan State Police credit card. While superiors decided whether to prosecute they have been assigned to the Asset Recovery Project, better known as the Green Squad. They are bored with their new assignment until Hussey gets their attention by advising there are “ten ems” in cash looking for a way across the border.


When they tell their boss, Commander James “the Cashman” Cash, he is jubiliant. Promotion awaits for a senior officer who makes a “ten ems” recovery. Tate and Brown work out with the Cashman that their reward, if they can seize the money, will be a trip back to Paris.


The Cashman gets additional officers assigned with a rather vague statement about the money being pursued. Mentioning “ten ems” would have the project scooped away from them.


Tate and Brown, visions of Paris in their eyes, start surveillance on Marko. Who is he associating with at this time? Where does he travel?


Marko, under severe pressure from the unforgiving Pavo, is desperate to find a safe passage for the money to Canada.


Working with Marko is Jerry Kelly, a psychopath and anarchist. It would be hard to come up with a more frightening character. Jerry is constantly simmering. Violence will flare at any moment without any provocation.


Marko reaches out to his childhood friend, Bobby “Presto” Preston who is a genius at smuggling:


A truckload of cheap chickens on one side of the border, and presto!, he’d come with a variation to move it across. Booze, smokes, anything. Anything except anything to do with dope.


While Bobby and Marko are blood brothers Bobby has no interest in transporting Marko’s drug money but Bobby has a daughter, Zoe.


I found the characters intriguing. Lamothe is an author who is becoming a relative rarity in contemporary crime fiction. He spends as much time developing the bad guys as he does the good guys. It has been a disappointment in some of Michael Connelly’s latest books that the bad guys are barely developed.


My next post will discuss how Lamothe created vivid images when he introduced Tate and Brown in the book.


The Presto Variations is noir crime fiction. There is no coziness to this plot. It is dark and bleak. If you like noir you will love the book. I am not fond of noir but I enjoyed the book.
****
The Presto Variations is on the shortlist for the Arthur Ellis Award for Best Novel this year. The book will be 13 of 13 for the 7th Canadian Book Challenge. It is the earliest I have completed the challenge in 3 Challenges. This year I am going to exceed with the challenge with further Canadian reading this month.