The Hero of Hopewell Hill by Barbara Martin 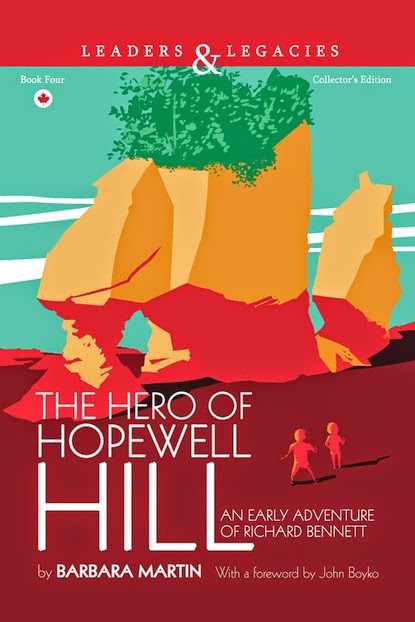 25. – 772.) The Hero of Hopewell Hill by Barbara Martin – Richard Bennett, Canada’s 11th Prime Minister, grew up on a farm near Hopewell Hill on the coast of New Brunswick. He is featured in the 4th book of the Leaders & Legacies series. Each book is about a future Canadian Prime Minister involved in an adventure when he or she was 12 or 13 years of age. Bennett is 13 in 1883.


Making a living by the 1880's has become a challenge for the Bennett family. The once busy shipyard of Bennett’s grandfather is a lonely place of memories as steel hulled ships have replaced the elegant wooden ships his grandfather built to sail the oceans.


Bennett and his friend, Len Tilley, like all young teenage boys, crave some excitement in their lives and are intrigued by mystery. One night they venture on to the cliff above the Hopewell Rocks to see if a local Indian legend can “be true – that the rocks were the trapped spirits of Indian warriors, waiting to be released”. While no spirits appear they hear sounds of men moving something on the side of the cliffs.


When he returns home, Bennett’s father, Henry, is upset over this foolish escapade. He wants Richard to start working full time on the farm as he is busy as a blacksmith. His mother, Henrietta, is more understanding. Trained as a teacher she understands Bennett’s desire to go to Normal School so he can become a teacher.


In town Bennett encounters the broad shouldered and surly Michael Killian who has been making inquiries about the local militia.


Despite the threat of punishment Bennett and Tilley return to the cliffs by rowboat to find out what has been happening there. Living on the Bay of Fundy they must be wary of the largest tides in the world which rise and fall 2-3 meters an hour to a total of 16 meters.


What they encounter leads them to realize there is a new Fenian threat. Memories are still fresh in Hopewell Hill of the attempted Fenian invasion at Campobello, New Brunswick 17 years previously. The Fenians remain confident Irish Canadians will rise to join them and they can take over New Brunswick. Bennett is determined to do his part to thwart the Fenians.


In challenging the Fenians Bennett displays several character traits that will serve him well as a lawyer and businessman in Calgary and then as Prime Minister. (Bennett, Prime Minister from 1930 – 1935, had the most difficult time to be Canadian Prime Minister as the nation struggles during the Great Depression.)


The teenage Bennett is caring of others. He is quick and decisive in making decisions. He is physically brave and not afraid to take on a tough situation.


As always in the series I learned something of both the future Prime Minister and of aspects of Canadian history. I had not realized the Fenian threat had reached as far east as New Brunswick. I had thought the Fenian attacks on Canada were limited to Upper Canada (Ontario) just after the end of the American Civil War.


It is a good book though I liked the earlier books in the series better than The Hero of Hopewell Hill. I would have preferred a more rounded portrayal of the young Bennett and further information on his family. He is abit too perfect. No flaws beyond stubbornness are set out. I wish his mother, obviously a very important person in his life, had a greater role in the story.

I am glad the series continues to bring to life historic adventures of future Prime Ministers. As the series builds in number young Canadian readers are getting a chance to see how our Prime Ministers have come from many different backgrounds.

My next post will discuss R.B. Bennett's later life and my family connection to his ongoing heritage in Calgary.
****


The Hero of Hopewell Hill is the 15th of 13 books I have read during the 7th Canadian Book Challenge which ends at midnight on next Monday evening. Canada Day, July 1, starts the 8th annual Challenge for reading Canadian authored books.