Walls of a Mind by John Brooke 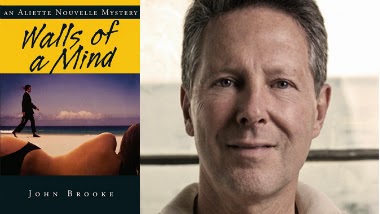 23. – 770.) Walls of a Mind by John Brooke – Chief Inspector Aliette Nouvelle has been transferred from the Alsace region to the Midi of Southwestern France after a bad ending to a relationship.


Walls of a Mind is the 5th book in the series but the first I have read. I would not have read the book if it was not on the shortlist for the Best Novel in the 2014 Arthur Ellis Awards sponsored by the Crime Writers of Canada. It is my loss not to have read earlier books in the series.


On a lovely crime free afternoon the inspector decides to treat herself to a picnic on the beach. Taking book, beach towel, parasol and lunch (“jambon-beurre on frest baguette, one hard-boiled egg, a few black olives. Carrot Sticks. A white peach” and one bottle of 1664 beer) she settles down on the sand. Being just before the summer rush the beach is quiet.


In a first for female sleuths I have read, Nouvelle rolls down the top of her swimsuit so that she is topless for tanning. As a good looking man in a suit gives her but a cursory glance walking by it appears she has a tinge of disappointment in the disinterest. (The cover captures the moment.)


Shortly after she is called to lead an investigation into the sniper killing of Joël Guatto, a member of a well known local family and an obscure politician who gained less than 1% of the votes in the last election for a federal representative. He had run for a right wing agrarian party, the Chasse, Pêche, Nature, Tradition Party, better known as the Hunting and Fishing Party, railing against the actions of the EEC.


While the family vineyard appears to be doing alright there is a simmering resentment in the region to the influx of cheap Spanish wine. The EEC rules allowing products to move easily across national boundaries are threatening the smaller grape growers and vineyards. There is a history of violent protest going back a century against imports of low cost wine.


Yet what reason was there to kill Guatto. He had no influence. He could damage no one’s interests. His ineffectual political campaign produced scorn rather than anger in his opponents.


As Nouvelle pursues her investigation she is drawn to Stephanie McLeod, an Enarque who had studied at the elite L’école de Administration in Paris. McLeod had returned home to care for her dying mother. She has stayed after her mother’s death working as a waitress in a rural bistro with owner Chef, Avi Roig, an Israeli exile. More importantly, she was deputy (campaign adviser) and lover to Guatto but she had little use for Guatto by the end of the election.


Her background is also intriguing to the police. Her parents had fled Canada and changed their names. Her father had sabotaged some international economic interests. Her mother was a member of the FLQ, the separatist terrorist organization that created havoc in Quebec in the early 1970’s.


While Tessier imperiously denies Nouvelle information it is clear that modern anarchists are being pursued.


Nouvelle learns that McLeod has/is also the lover of “Prince”, the leader of the anarchist group. McLeod is clearly at the centre of some complex relationships.


Yet how would the conservative Guatto be connected to anarchists? Their political goals are vastly different.


In a well constructed police procedural, Nouvelle carefully seeks out information on the murder while continually butting up against the DST.


It is a very good book. Nouvelle is a clever woman determined to do her job well but not with the obsessive compulsion of many contemporary North American fictional police to investigate 24 hours a day. She has time for good meals, for a new love interest and for reading – mysteries being her favourite.


I am going to search out earlier books in the series.
****

Walls of a Mind did not win this year’s award for Best Novel. It will be my 14th book for the 7th Canadian Book Challenge. I completed the Challenge with my 13th book and I am now reading bonus books.
Posted by Bill Selnes at 10:33 PM