Once We Were Brothers by Ronald H. Balson 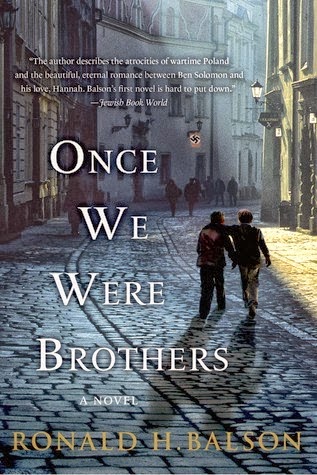 Once We Were Brothers by Ronald H. Balson – Ben Solomon needs a lawyer. It is 2004 and the 83 year old survivor of the Holocaust has seen Chicago insurance billionaire, Elliot Rosenzweig on television.  Though 60 years have passed Solomon is convinced that Rosenzweig is actually Otto Piatek, an SS officer, who participated in the Holocaust and stole Solomon family assets. Trying to scare Rosenzweig into confessing Solomon confronts him at the Opera with a WW II Luger handgun. The gun is unloaded. When the gambit fails Solomon is left with pursuing Rosenzweig in the legal system.


With no resources to fund a lawsuit Solomon tries to find a lawyer who will take up his cause pro bono. No lawyers are interested. Who wants to take on one of the most prominent citizens of the city for no tangible benefit? While lawyers love causes they need income.


Solomon is further limited in the type of lawsuit he can bring against Rosenzweig. Limitation periods have long expired for a claim that Rosenzweig personally harmed Solomon. What remains is a claim for the return of property or the value of the property Solomon claims was stolen by Rosenzweig.


Cat carves some time out of her busy schedule at a large Chicago firm to meet with Solomon. She insists she will only consider the merits of his case. If she thinks he has an action she will refer him to the Federal Department of Justice or a lawyer willing to take up the cause.


Then his story grabs her. Solomon grew up in Zamość, Poland where his father ran a successful glass manufacturing business and is an important member of the Jewish community. He tells her that Piatek, he refuses to call him Rosenzweig, was informally adopted by his family during the Great Depression of the 1930’s. Piatek, while non-Jewish, fits well into the Solomon family.


During 1939 with war looming Piatek’s parents contact the Solomons. His mother, Ilse Piatek, working as an assistant in the office of Reinhard Heydrich, warns the family of the dangers of the Nazis and urges her son to leave the Solomons.


Solomon’s family story takes up 2/3 of the book. It is a history of the Holocaust through the life of a Jewish family.


The book delves into the decisions to be made by a family threatened by events they can hardly comprehend. Do you abandon home, community and relatives because of a threatened danger? Can the Nazis really be so evil for the Germans are a civilized nation?


Piatek’s transformation once he joins the SS is insidious. It reflects how many Germans are drawn step by step into the Final Solution.


Yet is Rosenzweig actually Piatek? Rosenzweig insists Solomon is wrong. While acknowledging he left Europe after the war he fiercely asserts he is not Piatek.


Our legal system is based on evidence not belief. Unlike the Nazis our legal decisions require proof. Rosenzweig should not be condemned and his hard earned reputation destroyed because of an accusation.


Can the law provide a measure of justice six decades after the wrong? I have seen it done in Canada. We have gradually been addressing wrongs done to Indian nations as far back as the 19th Century.


The book addresses good and evil from personal to national levels. Can the legal system confront evil for an individual?


What should a lawyer do about a worthy case that his/her firm is not prepared to launch in court?  Hundreds of thousands of dollars in lawyers’ time and expenses would be involved. Relationships with clients will be affected. In a firm not just the lawyer commencing the lawsuit is affected by a major court action.


Solomon never waivers. He is going to sue Rosenzweig and prove he is Piatek. He has lived his life by a motto he picked up from Polish partisans during the war – “never surrender”.


Having read a significant amount about WW II much of the information about the development of the Holocaust was already known to me. For a reader unacquainted with details of the Holocaust it will personalize the death of 6 million Jews.


It is excellent historical mystery fiction with a legal element. I wish the law had taken a greater role in the book.


Even before looking I could tell it was the author’s first novel. The dialogue is not as natural as that of authors who have been writing books of fiction for some time.


Once We Were Brothers will challenge a reader. I find reading about the Holocaust depressing. At the same time Balson does not limit the story to the bad in the lives of the Solomons. He shows life as it was in Occupied Poland. Sorrow dominates but there is joy. Ulimately I was reminded that the fabric of civilization is thin and uncomfortably fragile. (July 20/14)
Posted by Bill Selnes at 11:42 PM