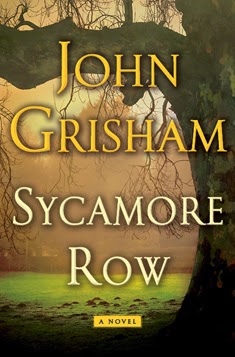 Earlier today, at the Library of Congress in Washington D.C., it was announced that Sycamore Row by John Grisham was the winner of the 2014 Harper Lee Prize for Legal Fiction.


Grisham becomes the first multiple winner of the Award. He won the Prize in 2011, the first year it was presented for The Confession.


The Harper Lee Prize for Legal Fiction is one of the few book awards that I am aware of that has criteria outside the quality of the book in the genre covered by the award. The judges for the Harper Lee Prize are to determine which of the books entered “best illuminates the role of lawyers in society and their power to effect change”.


The further criteria push readers to reflect on lawyers in contemporary society and what we are doing, or not doing, to effect change for the better though “for the better” is not a part of the criteria.


Last week I put up a post in which I considered the three books on the shortlist:


3.) The Burgess Boys by Elizabeth Stroud.


This year my choice for the winner is the same as the judges actually voting for the Award. I also thought Sycamore Row was the best book.


On the University of Alabama Law School website announcement of the winner Grisham, through his publicist who accepted the award for him, said:
"My thanks to the committee for the selection of
Sycamore Row," Grisham said. "I'm still admiring the
first Harper Lee award. It's hard to believe there is now
a second one. I am deeply humbled."
I hope Balson continues to write legal fiction. He made a fine debut with Once We Were Brothers. He joins another Chicago lawyer, Scott Turow, in writing good legal fiction. (Turow has not won the Prize and has not been on any of the shortlists.)


Had Once We Were Brothers been as good as Sycamore Row I would have chosen it as Grisham is already a winner of the Award.


I look forward to the 2015 Harper Lee Prize for Legal Fiction. It is becoming a highlight of my reading year to read the shortlist for the Prize.