The Art of Fielding by Chad Harbach 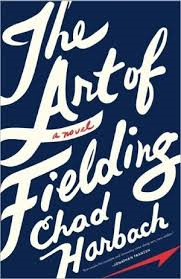 The Art of Fielding by Chad Harbach – How many books a year sweep you up into the story? Books that draw you completely into the plot and lives of the characters. In a good year I hope for a handful. The Art of Fielding is a great book for me. I say for me because, though non-baseball loving readers will enjoy the story, it will resonate most deeply with readers devoted to baseball.


While the book is set in the 21st Century it took me back in my mind to when I was a teenager.


I was drawn in by young Henry Skrimshander, a slight shy teenage shortstop, for a Lankton (obviously modelled on Yankton) South Dakota team whose passion in life is playing shortstop perfectly.


Over 40 years ago I was a slight shy teenage rural Saskatchewan ballplayer who dreamed of playing ball.


Henry has practically memorized The Art of Fielding by Aparicio Rodriguez (clearly Hall of Fame shortstop Luis Aparicio), a book on how to be an infielder by a major league shortstop. The book, filled with advice and aphorisms, reminded me of a real life book, The Art of Hitting .300 by Charlie Lau. Lau was a hitting guru revered by a generation of ballplayers.


When I was growing up on the farm I read everything I could about how to play baseball.


Henry has a glove so prized he can barely stand anyone, even teammates, touching it. He calls the glove “Zero”.


I valued the glove I had as a teenager and used it until the glove was falling apart.


Henry has barely made the team in each level of baseball. Only when coaches see what he can do on the field has he gained a spot on rosters.


I was never good for enough for school teams. I helped found teams so I could play ball.


At a tournament Henry meets Mike Schwartz, a big brash 20 year old catcher from Chicago, who after watching Henry field ground balls, conspires to get Henry admitted to Westish University on the shores of Lake Michigan where they can play together on the Westish ball team. Westish is a small liberal arts university near Green Bay, Wisconsin.


Mike is a born leader who has faced difficult times in his own life. He loves books and baseball. He aspires to be a lawyer.


As I entered university I equally loved books and baseball.


The name of the university sports teams, the Harpooners, comes from a brief association the university had with author, Herman Melville. He had lectured once at the university. The institution honoured him with a statute on campus and chosen to name their teams drawing on Melville’s most famous book.


Moby Dick is one of the world’s great novels. The obsession of Captain Ahab has inspired readers for over 150 years. It is easy to see parallels in the quest undertaken in The Art of Hitting.


At Westish Henry builds his skills and Mike mentors him.


At times I was reminded of baseball classics such as The Natural and Shoeless Joe.


There is a mythic quality to Henry’s pursuit of baseball perfection and the opportunity for a professional career.


Henry and Mike are characters I can visualize on every page. The characters around them are equally memorable.


Neither life nor baseball are easy and the book chronicles the challenges as pressure mounts from Henry’s growing streak of errorless games and the relationships of various characters become complex.


It is Harbach`s great skill as a writer that he can make the coming of age experiences of Henry and Mike focused on baseball vivid and real. Harbach further adds interest and complexity to the plot with other characters. The book is rich in the university atmosphere and relationships outside baseball.


I primarily read crime fiction. I have not ventured into much sports fiction. It is hard to find a credible sports story with interesting athletes that has a balance between the too simplistic and too complicated. Last year and this year my son, Jonathan, has provided me with a memorable book that meets those requirements. In 2013 it was The Silver Linings Playbook. This year I thank him for providing me with The Art of Fielding.


Both Henry and Mike take me back to my youth. Henry is the ballplayer I could have been if I had superior athletic talent and Mike the popular captain with academic skills that I might have been with a different personality.
Posted by Bill Selnes at 10:00 PM