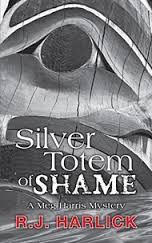 With the end of 2014 tonight I look back on a year in which I read just over 50 books which is about average for me. Over the past 15 years I have read 797 books.


My choices for the Best Fiction I have read in 2014 cover 4 very different books. As with other years my selections are not limited to books published in 2014.


1.) Silver Totem of Shame by R.J. Harlick – For the second year in a row my top fiction read of the year was a Canadian mystery. Last year it was The Gifted by Gail Bowen. This year’s choice stays in Western Canada but is set in British Columbia.


There were several reasons I loved Silver Totem of Shame:


b.) Personal connection – The murder took place in the Totem Pole carving shed on Granville Island, a location I have visited on many trips to Vancouver. I could see the murder in my mind from that familiarity;


c.) Strong characters – Sleuth, Meg Harris, and her husband, Eric Odjik, are both interesting people with a good relationship;


d.) Place, people and history – The mystery effectively integrates its setting, the residents of the area and their history to create a story that could only have taken place among the Haida people and their islands of Haida Gwaii; and,


e.) Social issues – Beyond being a good mystery the story looks at a current issue involving indigenous Canadians - the adoption of indigenous children by white Canadian families.


2.) An Officer and a Spy by Robert Harris – It takes exceptional writing skill to take a well known real life story, the persecution and vindication of Alfred Dreyfus, and create a great work of fiction.


Harris achieves that feat by focusing on Georges Picquart, the French Army officer, who refused to let an injustice be perpetuated. Harris, by focusing on Picquart has a hero rather than a victim, Dreyfus, at the heart of the story.


It was inspiring to read of a man of integrity and moral courage who was ostracized, prosecuted and dismissed from the French Army but ultimately prevailed in having Dreyfus exonerated and personally being raised up to become Minister of War.


3.) The Ascendant by Drew Chapman – While murder mysteries are usually my favourites The Ascendant reached the Best of 2014 list as a modern thriller. I have modest hopes that it will inspire more contemporary thrillers that do not dull the reader with an excessive body count.


For some reason I had never thought of cyber-warfare being real until I read the book. The technological attacks and counter-attacks between China and the United States were riveting. Not a physical bullet is fired but the virtual offensives are just as destructive. How many heroes of 21st Centuries thrillers rely on intellect rather physical violence? Unlike most current thrillers it was exciting and real rather than comic book.  How real was emphasized by the cyber attack on Sony over the movie, The Interview, and the subsequent downing of North Korea’s internet. (As an aside I watched The Interview with my family. It was partly curiosity and partly a personal protest against censorship that led me to watch the movie. It is often crude and never subtle. I did find The Interview entertaining. It is the opposite of The Ascendant in its plot being highly unreal.)


3.) Norwegian by Night by Derek B. Miller – I would never have expected that my favourite hero of the year would be an 82 year old American, Sheldon Horowitz, living in Norway.


Horowitz, a former marine and retired jeweller, struggling with issues of the elderly does not hesitate when a woman and a boy are in danger. He acts to protect a boy with whom he does not even share a language.


My appreciation of the book was summed up in the following paragraph:


The book is a modern epic that happens to be a mystery. Great themes of bravery, honour and loyalty share space with moments of absurdity. Horowitz displays improvisational skills on his journey that left me full of admiration.


It has been a good year of reading and my next post will feature my personal Best of category that I call Most Interesting.
Happy New Year readers and fellow bloggers!
Posted by Bill Selnes at 10:14 PM