The Hills is Lonely by Lillian Beckwith 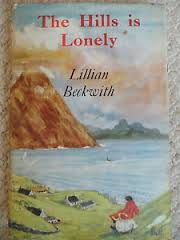 The Hills is Lonely by Lillian Beckwith (1959) – After reading two dark contemporary mysteries by Peter May (The Blackhouse and The Lewis Man) set in the Outer Hebrides I thought of re-reading a book from another series set in the Hebrides 50 years earlier in the 1950’s. I expect it has been three decades since I read it the first time. I was charmed all over again.


Lillian Beckwith is the pen name of Lillian Comber who moved from England to the Hebrides for two decades. In a series of 7 books of biographical fiction, The Hills is Lonely being the first, she recounts her experiences with the crofters of Bruach, a fictional Hebridean isle. Her experiences are much lighter than the grim lives of May’s characters. My next post shall highlight the differences.


In The Hills is Lonely the author’s doctor has recommended that she spend time in the country where she could “rest without being too lazy, and laze without being too restive”. With enough income to live a quiet life for a time she places an ad in a periodical seeking offers of a place to stay.


She is enchanted by a letter from the Hebrides:
Bruach

Dear Madam,
Its just now I saw your advert when I got the book for the knitting pattern I wanted from my cousin Catriona. I am sorry I did not write sooner if you are fixed up if you are not in any way fixed up I have a good house stone and tiles and my brother Ruari who will wash down with lime twice every year. Ruari is married and lives just by. She is not damp I live by myself and you could have the room that is not a kitchen and bedroom reasonable. I was in the kitchen of the lairds house till lately when he was changed God rest his soul the poor old gentleman that he was. You would be very welcomed. I have a cow also for milk and eggs and the minister at the manse will be referee if you wish such.


PS. She is not thatched.


To a letter asking for more information on “quietness and distance from the sea” Morag provides a reply that inspires the title:


Surely its that quiet here even the sheeps on the hills is lonely and as to the sea its that near I use it myself every day for the refusals.


Who could resist such an invitation?


Miss Beckwith, a schoolteacher and a woman of mature years, is soon on her way north to the Hebrides.


Entranced and appalled, often at the same time, she is soon at home on Morag’s croft.


Miss Peckwitt, as she is dubbed by the Islanders who have the Gaelic, is welcomed despite being English though she finds herself most appreciated for the amusement she provides them as she adapts to their ways.


As an example of island life, paying a condolence visit to a departed neighbour becomes a rollicking night. Miss Peckwitt remains in the kitchen having a cup of tea while Morag goes upstairs to view the body of Ian, taken before his time at 79.


One of Ian’s sisters bemoans they had to settle for the local doctor who could not save Ian from pleurisy. She had wanted the vet who had previously cured their cow of pleurisy. She says:


After Morag comes down from the visitation Miss Peckwitt is startled when two local men wrestle the body downstairs to the parlour:


“Lachy, you damn fool! Lower your end a bit; that was his big toe nearly halfway down my throat.”


On their way home, Morag stops to remonstrate with the men digging the grave. Fortified by a bottle of whiskey they are amusing themselves by throwing pebbles at the teeth in a skull they have found while digging.


The next day at the funeral Miss Peckwitt asks Lachy why he did not take his hat off during the outdoor service. He replies:


“Why now would we do that? Our heads were not hot!”


Persisting she mentions the undertaker took off his hat. In response:


“Aye,” answered another, “trying to shame us folk into followin’ suit so that we’d catch our death of cold and make plenty of work for him I doubt. Ach, but we’re too wise here for that sort of caper.”


And so the adventures continue whether in church or going to the cattle sale or participating in a ceilidh. A neighbour is always ready for a strupach (a cup of tea and a bite to eat).


I defy readers not to chuckle out loud. There is an abundance of humour and good cheer in the lives of the island people.
Posted by Bill Selnes at 11:57 PM