The Bullfighting Experience in Or the Bull Kills You 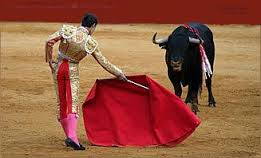 
Bullfighting is not a comfortable topic for Canadians. We have no public fights involving animals. Rodeos feature cowboys riding bulls for a few seconds or dropping off horses to grab steers and turn them on their backs. No lawful sport involves the killing of animals.


For those who challenge bullfighting aficionados ask in reply if they are vegetarians and, if not, do they object to how the cattle they eat live and are then killed in slaughterhouses.


The heading to each chapter has a quote about bullfighting.


Some are provocative as in Chapter Two:


I believe that bullfighting is the most civilized fiesta in the
world. – Frederico Garcia Lorca


A few are earthy such as Chapter Sixteen:


He’s got more balls than a blind bullfighter.


Some are more philosophical:


Chief Inspector, Max Cámara, who dislikes bullfighting, is forced to examine his thoughts on bullfighting during the investigation through discussions with bullfighters, bullfighting journalists and breeders of bulls for bullfighting.


He unexpectedly finds himself moved by the combination of drama, ritual, artistry and danger in bullfights. Max states:


And as he watched, for a second, for a moment that was lost almost as soon as it came, something extraordinary happened. It was if the division between Cano and the bull had disappeared, as though for a fleeting instant they had become one single being out there on the sand, unified by their fight and struggle: one entity separated not by their mutual wish to kill each other but almost as if by a kind of tenderness, a passion. It was if, for a brief period of time, matador and bull were brought together and joined through something that felt almost like love. But it was not any kind of love Cámara had ever sensed or been aware of before, nothing he had ever known. And yet it was there, binding them and making them one.


The primary victim Jorge Blanco may have been inspired by a real life matador as set out in an article at the Spain nowandthen website:

The latest star is José Tomás who returned to the ring in June of
2007 after an absence of 5 years.  The effect was electrifying as
half empty arenas were filled and newspapers devoted entire
pages to his exploits (even El País, Spain's left leaning and
perhaps most prestigious newspaper, which had virtually
eliminated bullfighting from its pages). His return started in
Barcelona and was attended by aficionados and celebrities from
all over Spain. Inside the plaza there was a capacity 19,000
crowd, outside about 5,000 protesters.


As with every current major professional sport there are issues over cheating in the bullfighting business. I do not know why I was surprised but bullfighting’s foundation is honour. When honour is compromised a sport’s integrity is threatened.


Or the Bull Kills You left me far more reflective about bullfighting than I had been before reading the book.
Posted by Bill Selnes at 12:04 AM