Palace of Treason by Jason Matthews 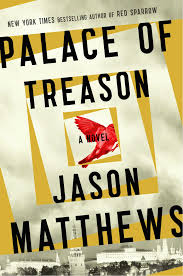 15. - 812.) Palace of Treason by Jason Matthews – (DDB) The adventures of Dominka Egorova from Russian intelligence and Nathaniel Nash of the CIA which began in Red Sparrow continue in a book which I enjoyed but generated conflicting emotions in me.


Matthews is brilliant when telling of spy operations. Descriptions of the skills and techniques used to discover and then avoid surveillance on the big city streets of the world are clever and convincing.


Early in the book Dominka is dispatched to Vienna to ensare an Iranian nuclear scientist so Russia can penetrate Iran’s nuclear program. Dominka was trained as a Sparrow (a sexually trained operative) and uses Udranka, a young Serbian woman, to compromise the Iranian. The operation is very effective.


Matthews introduced me to modern spycraft that makes such communications as dead drops primitive and archaic. Spies can now communicate with sophisticated electronic communication that I had never heard of before this book.


Still human contact is valued and clearly necessary. When one of the characters attempts to remain anonymous all the electronics do not succeed in keeping his identity secret.


In the opening sections of the book I felt the descriptions of the good people and the bad people were over-stated to the good and bad.


In particular, Nathaniel and Dominka were cartoon heroic. Later in the book they are shown with flaws. It made them more real as characters.


In Russia Dominka’s superior, Zyunganov, is completely evil. Dominka, a synaesthete, sees nothing but black clouds swirling around his head. He is cruel and sadistic.


As with Red Sparrow in Palace of Treason the good are almost all beautiful or handsome while the bad are physically unattractive - “The poisonous and diminutive  Zyunganov – he was just over five feet tall ….” is later called a dwarf.


The descriptions of the cities – Moscow, Vienna, Washington and Paris – are vivid. A reader can see and feel each city.


I do not want books to gloss over violence but equally do not want too graphic descriptions of violence. Matthews does not spare the reader in Palace of Treason and is not sexist. There are stomach turning descriptions of the torture of men and of women.


I was intrigued by how many people in both Russian and American intelligence had access to highly classified information. If correct, it is frightening the number of bureaucrats who can read communications and assessment and have knowledge of the identities of spies in their own service and moles.


Dominka is a mole within the heart of Russian intelligence. She is at the highest level of risk. There is never a moment in her life without tension.


The resolution of the thriller was compelling. I found myself anxious to read what was going to happen next. At the same time there were gaps in plausibility and it became a classic Hollywood ending. I expect it will be exciting on film and do very well in the current cinema marketplace.


Matthews is half way between a conventional thriller writer and an insightful novelist. I continue to struggle with whether he aspires to be Christopher Reich or John Le Carre. My hope is for the latter but I fear the current marketplace is tilted to the former. I hope there will be some sublties of characterization in the next book and less Hollywood at the end. I do appreciate that sex, spies and violence market well and I expect Palace of Treason to do even better than Red Sparrow.


I did find one character so intriguing that my post will be about that character. Matthew has made Vladimir Putin an important character in Palace of Treason.


I thank Simon & Schuster for providing me with a copy of the book. (The recipes are back in each chapter and very well integrated into the book.)
****
Matthews, Jason - (2013) - Red Sparrow and Recipes and Menus in Spy Thrillers and Vladimir Putin in Spy Fiction and Libel (Part I and Part II and Part III)