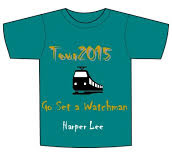 Last week I was reading a New York Times article on the numerous promotions and events being set up for the middle of July when Go Set a Watchman by Harper Lee is being released. The article set me thinking and, after an exchange of emails with fellow mystery book blogger Margot Kinberg at Confessions of a Mystery Novelist, we are co-hosting a special tour with regard to the book. Margot efficiently provided the following announcement post we are jointly posting today and created the tour blog logo above (she is a gifted person).

In one of the biggest pieces of literary/fiction news this year, Harper Lee’s Go Set a Watchman is about to be released. As you’ll no doubt know, the only other novel she’s released has been the critically acclaimed To Kill a Mockingbird. There’s no need to detail the long list of prizes it’s won, or the impact it’s had. Suffice it to say that it’s considered by many to be one of the best pieces of American literature. The University of Alabama Law School and the American Bar Association (ABA) have even instituted the Harper Lee Prize for Best Legal Fiction because of that novel.


There’s a great deal of anticipation about Go Set a Watchman, and there will no doubt be lots of people reading it. However, unlike many authors, Harper Lee won’t be making review copies available, giving interviews, or doing blog tours. So Bill Selnes at Mysteries and More From Saskatchewan had a terrific idea. Why not put together our own blog tour? It’s a great way to get some conversation going about the book, and see what each of us thinks.


Wanna be a part of it? You know you do! Here’s Bill’s idea:


If you’re willing to commit to being a part of this tour, let Bill or me know by 10 July, so we can put the tour together.


The tour will start 23 July and run for approximately a week (it could certainly go a bit longer if there’s enough interest!). So It’ll also be very helpful to us if you’d let us know which date works best for you.


Read the book and write your review or discussion of it. Then, plan to publish it on your blog when the tour stops there.


Don’t miss the tour!  You can use the comments section of this post to let us know you’re interested, or you can send an email to Margot at (margotkinberg(at)gmail(dot)com) or Bill at (mysteriesandmore(at)gmail(dot)com). Any questions? Ask Bill or me, and we’ll be happy to answer them. All aboard!
****
Posted by Bill Selnes at 1:06 PM