The Secret of Magic by Deborah Johnson 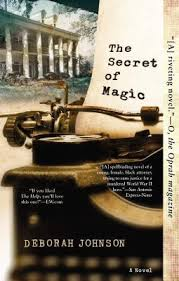 28. – 825.) The Secret of Magic by Deborah Johnson – There is a rising sense of doom in the opening of the book that I could almost not bear to read as I dreaded the consequences. Lt. Joe Howard Wilson, decorated WW II veteran and discharged from the Army, is riding the bus back to Revere Mississippi. Struggling with what we would call PTSD he is desperately looking forward to seeing his father Willie Willie.


After fighting for America he has returned to the stifiling segregation of the American South. (Joe Howard is a Negro in the language of the times. In this review I will use Johnson’s descriptions of African Americans in the 1940’s). Already forced to sit in the back of the bus, when a white police officer demands Joe Howard give up his seat for a German prisoner of war, he snaps and refuses to surrender his place on the bus and swears at the officer.


As the bus crosses from Alabama to Mississipi, less than 30 miles from home, a group of white men wearing hoods take Joe Howard from the bus.


Over a year later a letter arrives at the office of the NACCP Legal Defense Fund in New York City. Regina Mary Robichard, a newly graduated lawyer, opens the letter. It is from Mary Pickett Calhoun in Revere asking Thurgood Marshall, the real life lawyer who led the Fund, to come down to Revere to investigate the death of Joe Howard.


Regina has spent her life working hard at her education and being proper. She longs to prove her worth as a young female Negro lawyer and asks Marshall to let her go to Revere.


Both Regina and Marshall recognize the letter writer’s name. M.P. Calhoun has written The Secret of Magic, a work of fiction for young adults, 16 years earlier. A pivotal character is a wise colored man, Daddy Lemon:


He knew about the land, and his land was Mississippi. He had hold of its secrets and its magic.


In the book 3 children, 2 white and 1 Negro, want to find out about a murder. The book had enthralled Regina when she was a pre-teen girl who loved reading.


Regina’s family history provides her with a compelling reason for her to seek justice for Joe Howard and M.P. Calhoun has offered to pay expenses. Marshall agrees to Regina going to Mississippi.


Mary Pickett, while disappointed it is not Marshall, grudgingly allows Regina to stay in the small house that had been the home of Willie Willie.


A wise old man Willie Willie is clearly the inspiration for Daddy Lemon. He works to help Regina understand the dynamics of the town.


It is clear what has happened to Joe Howard but what can a young Negro woman lawyer in 1946 do about the death of a young Negro man in Mississippi when the grand jury, after the briefest of hearings, has declared that he “met with the adventure of an accident and was drowned”?


Regina asks questions. She follows up answers. She is not reckless but she has the determination of the young lawyer to right a grievous wrong through the law.


Chased out of the District Attorney’s office twice by the receptionist she sits outside upon the steps atop her lacy handkerchief until invited in for an interview with the D.A.


Regina does not fit into the place set for Negroes in Revere.


She is an admirable lawyer. Many lawyers of any generation would hesitate to embark on a futile cause with an unknown personal danger. I have taken on difficult cases but none with the element of personal risk.


Regina’s quest for justice for Joe Howard is a fascinating journey into life and law and justice in 1946 Mississippi.


I found the middle of the book dragged abit but The Secret of Magic, both the book of Regina and the story of Daddy Lemon, are striking with vivid powerful characters. I love John Grisham’s legal mysteries set in Mississippi 40 years later in time. Johnson has written a book of Mississippi and law that equally captured me. It is the second book I have read from the shortlist for this year's Harper Lee Prize for Legal Fiction.


Regina Mary Robichard is a fictional lawyer to be remembered.
Posted by Bill Selnes at 10:21 PM