The Nature of the Beast by Louise Penny (Part I) 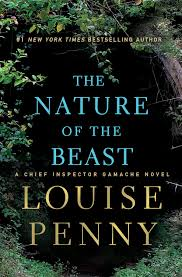 (35. - 32.) The Nature of the Beast by Louise Penny – Armand Gamache is one of my favourite sleuths. There is no fictional place I like to visit more than Three Pines, Quebec. Thus it is with regret I am disappointed with the 11th book in the series. I have found flaws in some of the earlier books but never dissatisfaction. The Nature of the Beast left me unsettled. Over this post and my next post I will discuss the plot and the reasons for my unhappiness.


I do not believe the posts have spoilers but, to explain my concerns, there will be more information than some readers would want to see before reading the book.


The story opens in Three Pines with 9 year old Laurent Lepage engaging and disrupting the community with his wild stories. With his long stick serving as his lance / sword / gun he charges into town on his bike and relates to the residents startling stories.


On a fine fall afternoon with “moss and leaves and twigs in his hair” he runs into the bistro knocking glasses off a table in his enthusiasm. He desperately wants Gamache to accompany him to the forest to see what he has found in the woods. He excitedly describes it as a humongous gun:


“As big as this building. And there was a monster on it. With
wings.”


Because Laurent has exaggerated so often his discoveries Gamache humours him in the way of adults and takes him home instead of to the woods.


Laurent had disrupted a discussion with the leaders of the local theatre group, Antoinette Lemaitre and Brian Fitzpatrick, who have found a brilliant new play. Antoinette, trying to build a sense of mystery to hype the play, has not released the author’s name. Brian, unable to hold back, blurts out that it was written by John Fleming.


When Gamache recalls that Fleming is one of Canada’s worst serial killers he is upset that the group would put on a play by Fleming. Gamache is adamant that it is wrong to produce a play by a mass killer and that sometimes censorship is justified. He discusses the play’s connection with its author:


“It has everything to do with him,”……”If John Fleming created it, it’s grotesque. It can’t help but be. Maybe not obviously so, but he’s in every word, every action of the characters. The creator and the created are one.”


If the story had followed through on the issue of how a work of art, here a play, should be considered when its creator is evil there would have been a plot line worthy of Penny. Instead, the question is barely addressed through the book.


Everyone in Three Pines is shaken when Laurent is found dead just off the road to his farm home. It appears he has fallen from his bike.


Unconvinced Gamache pushes for a further search as Laurent’s stick is missing. To the shock of everyone searchers find the stick near a massive gun, the firing chamber is tall enough to stand up in, hidden in the forest just outside the village under vines and camouflage netting. It has clearly been there for decades. At the base of the gun is an etching of a monster. Laurent had been telling the truth.


My disappointment started with the assertion that the gun was unknown to the village. It is the third time Penny has created a “secret” in the forest. In The Brutal Telling it was a hermit and his shack a 20 minute walk from Three Pines. In A Beautiful Mystery it was a monastery with priests and brothers that was unknown though the monks interacted with their neighbours. Now a giant gun was supposedly secretly built and hidden in the forest half a kilometer from the village.


If anything rural people are more curious than city people. They know exactly what is happening around them. The huge secret gun defies credibility as much as the hidden underground casino and rooms in A Door in the River by Inger Ash Wolfe (Michael Redhill).


Had Penny written that the gun, long abandoned, had been forgotten over the decades I would have believed the story.


Penny does skillfully bring Canadian arms designer and seller, Gerald Bull, into the plot as the creator of the gun. In real life Bull gained notoriety in the late 1980’s for his contacts with Saddam Hussein as Bull sought a country willing to build his supergun that would shoot a projectile into the upper atmosphere high enough to orbit.


Penny also does well in outlining the challenge for the Sûreté officers investigating the crime. Gamache, their former superior, is present and a valuable resource but he is no longer a member of the force. He wields no official authority but his presence commands respect.


An interesting addition to the investigation are two CSIS (Canadian Intelligence Security Service) agents. We do not often think about Canada’s federal intelligence agency. They profess surprise at the existence of the massive gun but it is clear they have far more knowledge about Bull and his Supergun than they are revealing to the police. The agents, Mary Fraser and Sean Delorme, are portrayed as dowdy and almost bumbling. Are their appearances and actions contrived?

(The rest of the review on Wednesday.)