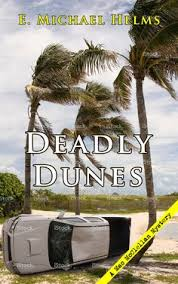 42. – 839.) Deadly Dunes by E. Michael Helms – MacArthur McLellan, inevitably known as Mac, is a retired Marine First Sergeant  in his 40’s living in a travel trailer on the “Forgotten Coast” of Florida’s panhandle. To fill his retirement Mac has become a private investigator. He is a trim 190 pounds and 6’2”.


Readers of crime fiction will keep thinking of Travis McGee, a Floridian sleuth of a genearation ago, when reading about Mac. Travis was also a physically imposing former soldier living in a form of trailer, the famed Busted Flush houseboat, while taking his retirement in chunks and pursuing difficult cases. Add that each loves fishing and has a strong moral code and there is a strong likeness.


The greatest contrast is in intellect. Travis is a philosopher sharing his thoughts through the books. He thinks deeply and provides insights into life. Mac’s limits are illustrated by his lack of knowledge of Fernando de Soto. Where Mac had no cluse about the 16th Century explorer of Florida I am sure Travis would have known a fair bit about de Soto.


In the opening of Deadly Dunes, the third book in the series, Mac meets with Jessie Lofton to discuss the death of her brother, Jake Loften. Killed by a bullet to his right temple the police investigation concluded that he committed suicide. Beyond the forensic evidence supporting a self-inflicted wound Jake’s marriage had recently broken up and there are major psychological issues in his past.


Jessie is convinced it is murder not suicide. Jake, an archealogist, had just started upon a personal project to prove a band of de Soto’s men had spent time on what is now known as Five Mile Island. With some skepticism Mac agrees to investigate Jake’s death.


He is stunned that same evening to learn Jessie is dead. A tire on her new Mustang has exploded and she lost control of the car.


Though he has no paying client Mac is determined to find out what happened to Jake and Jessie. He believes they were murdered.


A half million dollar insurance policy payable to Jake’s separated wife, Laurel, offers a motive for the non-grieving widow. She is already spending the proceeds.


While keeping an eye on Laurel he looks to what is happening on Five Mile Island where Jake had started looking for proof of the Spanish explorers.


In a departure from virtually every other fictional private investigator he takes on an assignment to shadow a philandering husband to earn some money while carrying on his unpaid murder investigation. It had always seemed unbelievable to me how private investigators in crime fiction disdain divorce work when you know it is a staple of the industry.


Mac gradually penetrates the deceit around the deaths of Jake and Jessie.


The book had one of my least favourite solutions. Characters kept dying until basically only the killer was left as a suspect.


It was interesting how the story became more unpredictable as the story progressed. Still Deadly Dunes was an average mystery. It is not bad but it is definitely not great. I am doubtful I will read another in the series. Mac is not going to succeed Travis McGee as a great Florida crime fiction character.
Posted by Bill Selnes at 10:18 PM