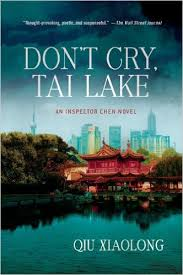 Don’t Cry, Tai Lake by Qiu Xiaolong – Chief Inspector Chen Cao has been made an offer he cannot refuse. A mentor, Comrade Secretary Zhao, a high cadre invites Chen to take a week vacation at the Wuxi Cadre Recreation Center about an hour from Shanghai. Zhao had been scheduled for the vacation but says he is too busy. Zhao vaguely suggests Chen keep his eyes open and prepare a report on his observations of the arear around Wuxi.


At the Center Chen is shown to a beautiful nine room villa normally occupied by the highest cadres. It is a measure of Zhao’s continuing status within the Party though he is officially retired.


While ill at ease with his opulent accommodations Chen does his best to relax at the combination “resort and sanatorium”. It is located on the edge of beautiful Tai Lake. Chen had enjoyed a visit to the lake as a child. It was famed for its clear water.


Shortly after arrival Chen stops at a small eatery in Wuxi for a late lunch. While there he meets the lovely Shanshan, an environmental engineer at the Wuxi No. 1 Chemical Company. Chen is attracted by her beauty and entranced that she loves poetry and can quote from her favourite poems.
During their discussion he learns the lovely looking lake is heavily polluted by untreated waste being dumped into the lake by the factories on its shores. Significant sections of the shimmering lake are covered with green algae. Ten times the amount of industrial sewage is now put into the lake than was deposited before China’s industrial boom


Her company is the No. 1 culprit. While there are environmental regulations enforcement is lax and corrupt.


Shanshan is unpopular with Comrade Liu, the general manager of her factory. He has been well rewarded for steadily increasing production and strong profits. He espouses the maxim of Party leader Deng:


“Development is the one and only truth.”


Chen does not disclose his status as a high ranking police officer. He lets Shanshan think he may be a teacher, albeit one with real connections reflected in him staying at the Center.


The next day he goes again to the little restaurant hoping to see Shanshan again for she leaves her lunch there each day with her “Uncle”, family friend. When Shanshan arrives she is distraught for Comrade Liu was murdered the previous night in his “home office”.


Because of his position Liu had been authorized a three bedroom apartment near the factory so that he has a place to go if he does not want to go to his large home in Wuxi.


The young Huang is star struck at being called by and then meeting the famous Chief Inspector Chen. He has read the mysteries translated by Chen. Huang has devoured reports of Chen’s major cases. He thinks of Chen as a modern Sherlock Holmes. When Chen asks to learn about the murder Huang is thrilled to have the chance to learn from Chen. He has no problem keeping Chen’s identity concealed as requested by Chen.


The leading suspect is Jiang, an environmental activist, who was well known for his challenges to the environmental practices of Wuxi industry. It is a convenient political solution to have the murderer such a troublemaker. The dreaded Internal Security is swiftly building the case.


Chen, when Internal Security also turns its attention to Shanshan, becomes a participant in the investigation rather than just an observer though he resolutely stays in the background.


The investigation takes Chen into the depths of pollution issues in modern China and the vast sums at stake when a state owned company becomes a public company.


Don’t Cry, Tai Lake is the most overtly concerned with a social issue of the Chen mysteries I have read. It remains a good mystery. While not my favourite in the series I gained insight into yet another facet of modern Chinese life. What was most striking in the book were the elements of poetry that involved industry and pollution.