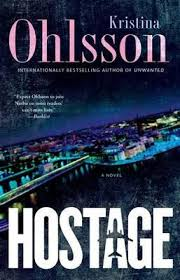 (1. – 843.) Hostage by Kristina Ohlsson translated by Marlaine Delargy – Fredrika Bergman has returned to Sweden after a year in New York on maternity leave following the birth of her second child. She has not gone back to working for the police but is employed as an analyst for the Department of Justice.


Her former boss at the police, Alex Recht, continues to regret her departure and wishes she were still working with him.


Eden Lundell is the head of the counterterrorism unit of Säpo (the Swedish Secret Service). The tall striking Nordic beauty is wrestling with the issue of Zakaria Khelifi, an Algerian refugee, who has been acquitted of planning to commit an act of terrorism. In the same trial two other men from North Africa had been convicted of plotting a major attack on the Swedish Parliament.


Though acquitted Säpo believes that Khelifi was a collaborator with those convicted and has had contact with other European terrorists. Säpo is recommending to the government that his residency permit be revoked and that he be deported. Säpo’s submissions are accepted and Khelifi is taken into custody.


The next morning an SAS leaves from Stockholm on a flight to New York City. Shortly after departure a shaken flight attendant delivers a note to the pilots found in the toilet for first class passengers.


The note says the plane will be blown up unless the United States government closes Tennyson Cottage and the Swedish government revokes its decision to deport Khelifi. The pilots are to keep flying the plane and not land it until the demands have been met. The governments are given the time provided by the fuel aboard the plane to comply with the demands.


The lead pilot is Karim Sassi and the co-pilot is Erik Recht. Erik is Alex’s son.


Agents and officials in numerous departments and agencies of each government are called on to assess the threat and work on a response.


Sassi refuses to make an emergency landing at the nearest airport fearing for the safety of the passengers if he deviates from the instructions in the note. In the air the main pilot holds the power to decide what is the safest decision for the passengers and crew.


It is swiftly determined that Tennyson Cottage was a secret American detention and interrogation facility in Afghanistan.


Swedish investigators can find no connection between Khelifi and Tennyson Cottage.


American intelligence agencies are reluctant to share any information though there are over 100 Americans on the plane.


Tension gradually builds as the plane sails over the Atlantic.


Frustrations build in Sweden as investigators cannot find a reason why these two apparently separate demands were made of different governments.


Both governments proceed on the basis that the demands will not be honoured. In the world of the 21st Century governments will no longer meet terrorist demands. Innocent lives may be shed but they are not willing to create a precedent for future terrorists to exploit. In any event, in Hostage there is no one with whom the demands can even be discussed.


With no way to determine if there is a bomb on the plane the security and police organizations must reach a decision on how likely it is that an explosive is aboard.


The investigation is focused in Sweden where the flight originated and investigators can seek out information on Khelifi.


As the moment of decision approaches the tension becomes acute.


There are clever twists in the plot. Overall Ohlsson does well at creating a thriller which is a form of locked room mystery. No one can gain access to the plane during flight.


The format is the opposite to the painstaking, often leisurely, investigations of Napoleon “Bony” Bonaparte in the mysteries of Arthur Upfield. The whole plot of Hostage takes place over 48 hours.


I come late with this book being my first in the series featuring Bergman. Hostage is the 4th book of the series. In Hostage I found Bergman’s role was under-stated. It was interesting to see the lead character not dominate the book.


I found Hostage a very good thriller. There were some decisions that did not add up to me. On the other hand the ending was a real surprise and would never be in a major American thriller.


Hostage could be a strong movie. Hollywood has made several major movies involving terrorist threats to airplanes but even Hollywood would struggle to make Hostage into a movie for Bruce Willis to extend the Die Hard series.
Posted by Bill Selnes at 10:31 PM