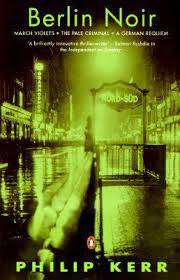 (2. – 844.) March Violets by Philip Kerr – A trio of Bernie Gunther thrillers titled Berlin Noir had been waiting for too long on a shelf in the den next to my desk. It rested there as I had a lingering desire but no urgency to read the book. Going on vacation to Mexico at the beginning of January encourage me to pack Berlin Noir as I would have three books within the covers of one volume.


March Violets is set in Berlin at the time of the 1936 Olympics and brought to mind In the Garden of Beasts by Erik Larson about William E. Dodd and his family in Berlin at the same time. Dodd was the American ambassador to Germany. It took years of constant contact for the Dodd family to appreciate the cruelty and danger in Nazi Germany that Bernie lived each day.


Bernie drew me in with his sardonic, often crude, never subtle wit. His personality compels him to mock every situation. Such an attitude, while entertaining to the reader, provokes the recepients of his comments. Fortunately, Bernie is big enough and tough enough to deal with the consequences.


Still Bernie is not suicidal. He restrains his tongue while meeting with senior Nazi leaders. He is actually respectful in the presence of Hermann Goering. (When no Nazis are around Bernie refers to him as “Fat Hermann”.)


The Gestapo and SS already dominate life in Germany by 1936. It has been three years since the Nazis took power. Everyone lives and talks carefully for all are at risk of being whisked away to a KZ (concentration camp).


In a police state I wondered what need can there be for a private investigator. Yet there is a real need. Much of Bernie’s time is taken up with searching for missing persons, especially Jewish Germans. As well, the wealthy need determined investigators. Bernie has three virtues his clients prize. He is discreet and confidential and is not an official of the State.


Hermann Six, a Ruhr steel magnate, summons Bernie to his home. He tells Bernie that his daughter, Grete, and her husband, Paul, have been murdered and their home burned. Taken from their safe was a very valuable diamond necklace. Grete’s estate went to Paul. Paul bequeathed his whole estate to the Reich. Six has not reported the necklace stolen because he is appalled by the thought the necklace would go to the German government as part of Paul’s estate. To encourage Bernie, Six will pay a generous 70 marks a day and, if the necklace is recovered, promises Bernie 37,500 marks (5% of its insured value).


The next evening Bernie receives a summons from Ilse Rudel, the sultry movie actress, who is Six’s much younger second wife. She is very interested in Bernie’s investigation. To gain his confidence she invites him into her bed. He but briefly hesitates. After their frolic she is angry and disbelieving when Bernie tells her that she is not the subject of his investigation.


Bernie seeks out jewelers who might be willing to deal with such a special necklace. The quest takes him into the heart of Nazi evil. Jews, desperate to leave Germany, are lined up at jewelers selling their family gems for a fraction of their real value.


Inevitably, the investigation encounters Nazi bureaucracy. There is more to the original robbery than Bernie realized. He receives an invitation to meet with Goering who also wants Bernie’s discretion and confidentiality and unofficial status. There is a distinct tone of menace should Bernie fail Goering.


Abundant violence accompanies Bernie. It is a book with a lot of bodies. Unlike some thrillers the violence does not feel gratuitous. Aggression and death are very much a part of the culture of Nazi Germany.


Noir does not always attract me but I was fascinated by Bernie, the fomer Berlin police officer, functioning in the midst of the Nazi regime. How does a man preserve his integrity in a nation that has abandoned the principle? Compromise is prudent but it is a difficult concept for Bernie. In March Violets his honour is battered. I will see how Bernie fares two years later in the second book, The Pale Criminal, as the Nazis impose ever more strongly their twisted vision on German society.
Posted by Bill Selnes at 10:46 AM