The Weed That Strings the Hangman’s Bag by Alan Bradley 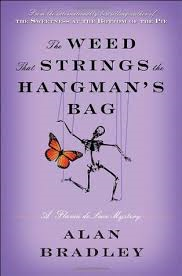 The Weed That Strings the Hangman’s Bag by Alan Bradley – Flavia de Luce returns in the second of the series. Lying atop a tomb in the cemetery of St. Tancred’s church she contemplates what her family will think of her when she is dead (her preferred epitaph - A Maid whom there were none to praise / And very few to love). With her extraordinary hearing she hears a young woman intensely crying in another part of the churchyard.


Upon rising from the tomb she encounters Nialla, the assistant to Rupert Porson, the famed puppeteer whose Porson’s Puppets are the stars of BBC television on The Magic Kingdom. Well known to children throughout the land they still need to travel around England putting on local shows.


They have become stranded at Bishop’s Lacey as their aging Austin Eight van has broken down and they have no money for repairs.


Vicar Denwyn Richardson gallantly offers the church hall for a pair of performances that will get them the money needed for repairs and fill in the time until the local mechanic is back in the village.


Rupert has a well-developed upper torso but a crippled leg. He is also talented in designing and making his marionettes.


While chemistry is her passion Flavia’s curiosity is unbounded. She is enchanted by the puppets and the stage Rupert has built for shows.


Rupert and Nialla are given space at Culverhouse farm near the village to set up their tent during their stay at Bishop’s Lacey.


The farm is owned by Gordon and Grace Ingleby. Their lives were devastated 5 years earlier when their 5 year old son, Robin, died. He was found dead hanging from the decaying gallows used in generations past for hanging criminals. Grace Ingleby has never been able to adjust to the loss.


As Flavia makes her rounds on her bike, Gladys, she realizes that Rupert has some form of previous connection with the Ingleby family.


Never content to just observe Flavia wonders about Nialla’s outburst. She analyzes a discarded handkerchief used by Nialla and determines that Nialla is pregnant.


At the hall the stage has been erected and the first performance focused on the children of the village is a great success. Rupert is a master puppeteer.


The show is the classic Jack and the Beanstalk. The climax of the show sees the upper body of the giant crash upon the stage to great effect.


I do not know enough young children in 2016 to know if puppets are still as popular as they were 65 years ago. In 1950 television is in its infancy. (During the book the de Luces acquire their first television set.)


The evening performance sees many adults joining the children but it has a different dramatic conclusion. Rupert crashes on to the stage. He is dead.


Even in the chaos of the moment Flavia’s keen powers of observation and concentration let her see the evidence that allows her to determine the cause of death.


Inspector Hewitt is already at the performance so the investigation is begun within moments. Was it an accident or murder? Flavia knows.


Flavia continually draws upon her knowledge of chemistry as she investigates.


Flavia’s formidable Aunt Felicity visits the family. Her personality commands the house. An act of unexpected kindness by her towards Flavia relieves Flavia’s nagging unease over her relationship with her mother before her mother died.


Flavia has a growing relationship with the troubled Dogger. PTSD from World War II has left him a battered man but he has a keen intelligence that Flavia draws upon in her investigation.


Within the De Luce family a day of reckoning is at hand. Flavia’s father, drifting through life and absorbed by his stamp collection, has left the family on the verge of financial ruin. Fortunately, I have the third in the series, A Red Herring Without Mustard, to read shortly.


Early in the story I was not really caught up in the plot but it got better and better. I thought the ending moving and tragic.
****
Posted by Bill Selnes at 7:09 PM