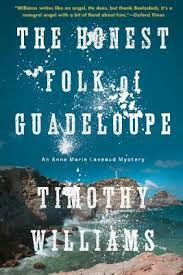 The Honest Folk of Guadeloupe by Timothy Williams – Occasionally I like to try reading a book no one has recommended and just looked appealing at a bookstore. While in Victoria during our short April trip I stopped at Munro Books, the iconic downtown bookstore, whose owner gave the store to his employees last year. While in the store I went through the crime fiction section and saw a paperback copy of The Honest Folk of Guadeloupe.


I had not heard of the Anne Marie Laveaud series before seeing the book.


With no recommendation how do you decide whether to buy a book?


As usual I avoided reading the summary on the back as I either find they have too much information or are misleading.


That left the blurbs. I sometimes find the short blurbs useful. Unfortunately, none featured a blogger I would know.


There was a blurb from Mystery Scene on the front cover. On the back were blurbs from BookPage, Kirkus Reviews, Publishers Weekly and Booklist. None spoke of a book filled with violence. They indicated the book dealt with challenging themes. Publishers Weekly spoke of the “legacies of colonialism …. nuanced racism, and troubled interactions between men and women”.


In the end it was the setting that tipped the balance for purchase. I have read few mysteries set in the Caribbean and none in Guadeloupe. I thought I could learn something of the French island of Guadeloupe by reading the book.


While I have always waited to finish a book to write a review for the blog I am going to break my approach and start my review with this post before I have completed the book.


Up to tonight it had been slow going in the book.


Ms. Leaveaud is a hard working juge d’instruction but I was plodding along with the reading as she plodded along with her investigation.


Initially, she had been called to look into the death of Rodolphe Dugain “better known to most television viewers as Monsieur Environnement”. When police officers arrived at his office to investigate allegations of misappropriation of funds at the Centre Environnement he slipped away and went to the 14th floor and, in an apparent suicide, jumped to his death.


While the official sources are vague Ms. Leaveaud is warned she should not pursue what happened and accept it was suicide.


While unwilling to give up she is assigned to another case that has a higher priority. A young woman, wearing only her bikini bottom, is found dead on a beach. The threat to island tourism has her superiors pushing for a swift resolution.


She works in a challenging atmosphere. According to the book all island men, whether single or married, are obsessed with pursuing every woman they encounter each day.

There is significant casual racism. The lighter the colour of a resident’s skin the better for social climbing on the island.


A 100 pages into the book I was wondering whether to continue to an end that seemed many pages away when I was totally surprised by a plot twist. It jump started my interest in the book and I am reading on.


My next post will advise if the rest of the book proved entertaining.
Posted by Bill Selnes at 11:10 PM