Jack – A Life with Writers by James King 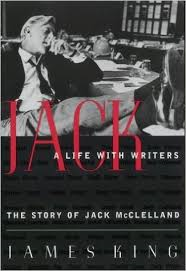 Jack – A Life with Writers by James King (1999) – If asked to name a Canadian publisher my first thought is Jack McClelland even though he left McClelland & Stuart 30 years ago. His drive and personality made him the face of Canadian publishing for 40 years. He published over 2,500 books.


His father was a founder of the company. After serving as a motor torpedo boat commander in the Canadian Navy during World War II Jack entered the family business in 1946. His nickname of “Sonny Boy” grated.


On his publishing goal:


He shared his father’s innate conviction that publishing was a belief in and commitment to his Canadian culture.


He became a Canadian nationalist in book publishing when McClelland & Stuart lost over half of its sales and income because the American publisher, Doubleday, severed their agency relationship and set up a Canadian subsidiary.


Though Canada has always been inundated by American published books Jack was determined to publish Canadian authors. It was a financially perilous quest that needed infusions of government money to survive.


Getting Canadians to read Canadian authors even as much as American and English authors has been difficult for publishers. I see it no different today. Yet Jack never wavered. Over the course of his career he published most of Canada’s best known authors.


In fiction his authors included such strong women writers as Gabrielle Roy, Margaret Laurence and Margaret Atwood. There were non-fiction authors such as Farley Mowat, Pierre Berton and Peter Newman. Among his poets were Earle Birney, Irving Layton and Leonard Cohen.
His attitude towards poetry was striking:


I would say that we publish Canadian poetry first and foremost because we are Canadian publishers and we still consider poetry one of the most important forms through which the creative writer may express himself.


He published poetry despite the financial consequences:


We inevitably lose money even on a relatively successful volume because the market is at best a confined one.


He was a publisher involved in the “reading, acceptance or rejection of manuscripts”. On assessing books:


He once said, “I can usually tell if manuscript is good, but I can’t tell why." He responds to books intuitively, which has made him an unusually receptive reader.


An illustration of this approach was set out in my recent post on the author, Patricia Blondal, where he stayed up until 3:00 in the morning reading her book, A Candle in the Sun, and then met her that day for a lunch that lasted all afternoon.


For Jack authors were at the heart of publishing:


“We are middlemen offering a service to writers. It is a service business. We serve well or not. If we let them down we hurt ourselves, just as in any other service industry ….. You can make almost any mistake at M&S and be given another chance – rudeness or arrogance in dealing with authors – no matter who they are – I will not tolerate.”


I wonder how many authors today feel their publishers so value them.


While he may have been privately shy, flamboyant barely encompassed his public persona. 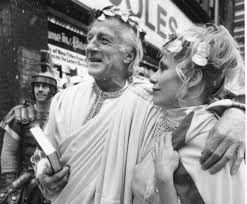 His promotions could be outrageous. Can anyone think of another publisher who, on a snowy March day, would dress in a toga and gold laurels to join author, Sylvia Fraser, dressed in a glittering silver dress, to go by horse drawn chariot to visit Toronto bookstores to promote her book, The Emperor’s Virgin? And when the chariot broke down, the never daunted the sandal shod Jack trudged with Fraser through the snow to visit the bookstores.


“I have never been a superrealist. I have been an enthusiast, an optimist, a problem simplifier – never a super-realist or even much of a realist.”


I regret I never met him.


The best parts of the book were excerpts from letters he wrote to authors. My next post will discuss and quote those memorable missives.


King does well in describing Jack the publisher but the book is a touch worshipful to be a convincing biography. It leans to the style of official company biographies commissioned by large corporations. Clearly charmed by Jack I wish he had showed more candour.
Posted by Bill Selnes at 7:01 PM