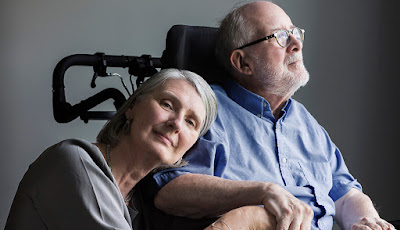 A few weeks ago I put up posts about Louise Penny’s new book, A Great Reckoning. At the close of the book Louise set out all the people who had helped her be able to write the book as she coped with the increasing dementia problems of her husband, Michael.


Last week author, Anthony Bidulka, shared on Facebook an article Louise wrote for the AARP. It can be found at http://www.aarp.org/home-family/caregiving/info-2016/mystery-writer-louise-penny-personal-essay.html


Focused on caregiving the article discusses how Louise and others cared for Michael.


I was reminded of a day at our Rotary Club in Melfort when a member told us about the journey of himself and his wife in dealing with her early onset dementia in another community. As her health declined he advised his club in that city that he would have to give up his membership as he could not leave her alone to come to meetings. With a catch to his voice he said the wives of his fellow members (at that time Rotary was mainly male) organized themselves to be with his wife for each meeting so he could have abit of time with his friends.


Louise's article is titled “The Last Promise”. She promised herself that she would be with Michael when he died holding his hand.


It is a heart wrenching story. I admire Louise for writing about their challenges and for her commitment to Michael.


After the article there was a note that Michael had died on September 18 and that Louise had been able to fulfill her last promise.


Peace be with you Louise and Michael.
Posted by Bill Selnes at 7:48 PM