Elegy for Eddie by Jacqueline Winspear 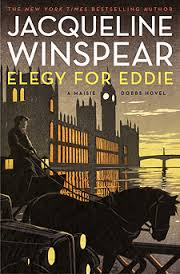 Elegy for Eddie by Jacqueline Winspear – Maisie Dobbs is meeting with a group of costermongers, the men who sell fruit and vegetables on the streets of London. It is a return to her youth when her father was a coster. Life changed with the death of her mother. Maisie went into service but she has never forgotten her origins.


The proud and fiercely independent costers have taken time from their busy days to consult with Maisie in her position as a private enquiry agent.


They bring sad news. Eddie Pettit, the gentle giant of their streets, has died at a paper manufacturing plant. A huge roll of paper has crushed him. The costers have doubts it was an accident and want to retain Maisie to find out what happened to Eddie.


Maisie is shaken to think someone could want Eddie dead. He was a special person. Every age struggles to describe those with mental limitations. In our era Eddie would be designated mentally challenged. I prefer the phrasing of the early 1930’s. Eddie was a simple man. He has abit of learning and can undertake basic tasks. He is fortunate to live with his mother, Maude, and her friend, Jenny.


What makes Eddie unique is that he has a gift for working with horses. When help is needed with a horse who is distraught or ailing or agitated Eddie will be called. With empathy and a gentle touch he can calm the most disturbed horse. Whatever his mental limitations Eddie is a master with horses.


Maisie undertakes the assignment and sets out to investigate what is happening at Bookhams Paper, the factory where Eddie was killed.


She sends her assistant, Billy Beale, out to conduct some discreet interviews at a pub frequented by the workers at Bookhans. She is shocked the next day to learn he has been viciously assaulted and is unconscious in hospital. A disturbed Doreen Beale rails at Maisie for her interference in their lives.


At the same time Maisie is uncomfortable in her relationship with Viscount James Crompton. She enjoys their physical intimacy. (Their disregard for Depression mores does not feel right.) It is the emotional depth and future of the relationship that bother her. James would propose if he thought she would accept. She realizes that at the heart of her unease is that she would have to give up control of part of her life were they to wed.


It is an issue she finds sweeping across her relationships. In frank discussions psychologist, Elspeth Matters, and her best friend, Priscilla Partridge, point out to her that she seeks to control rather than help other lives producing increasing resentment to her good intentions.


Whether it is providing a house for the Beale’s at minimal cost or paying for the education of her assistant, Sandra Tarpley, Maisie, to her dismay, realizes that she has moved past help to a manipulation of lives. She is leaving those she would assist beholden and, even resentful at times, towards her.


As she probes Eddie’s death she learns he was being exploited and that there is a vast effort at national manipulation under way.


Unlike many current mysteries there is a subtle ending. Maisie and myself are left conflicted by the resolution. While she seeks her usual round of meetings to assure satisfaction with the conclusion of the case she can achieve but a partial satisfaction.


The 9th book in the series is the first not to have a major connection with World War I. Fifteen years have passed since the end of that war. Readers know World War II is but 6 years away. It is becoming clear that the rise of the Nazism is a threat that will challenge Maisie in future books


Winspear’s development of Maisie reminds me of Joanne Kilbourn in the mysteries of Gail Bowen. Joanne has aged 25 years through the series. For Maisie, as it is for Joanne, family is important and integral to each mystery. I realized in reading Elegy for Eddie that I am as interested in Maisie’s life as the solving of the mystery.