Weave a Murderous Web by Anne Rothman-Hicks and Ken Hicks 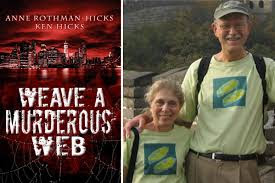 Weave a Murderous Web by Anne Rothman-Hicks and Ken Hicks – Jane Larson is a skilled and aggressive litigator in New York City. Forsaking her mother Martha’s lifelong support for the poor and the weak Jane is in a law firm devoted to the needs of corporate America.

Jane has prospered in the lucrative world of commercial litigation:

Modesty does not forbid me from saying I tore the place up and made Ridge look very good. It’s not that I am a genius. Rather, many lawyers at big firms are scared to death to take cases into a courtroom for a trial and I was not. I pushed my matters to conclusion like a muleskinner with a whip and, as a result, the firm’s clients were very happy.

Jane is lured by a legal assistant, Francine, into representing Francine’s friend, Gail Hollings, caught up in a family law dispute with her ex-Larry over his claims he cannot afford child support. Gail asserts he has abundant money from selling drugs.

Gail successfully draws media attention to her cause by wearing outside and even inside the courtroom:

…. dressed, if you could call it that, in the kind of barrel contraption drawn in cartoons to represent those who have lost all they own in the stock market. Like those cartoons, beneath that barrel she appeared to be little except a flesh-colored spandex leotard that might keep her out of jail, I supposed, but left no part of her well-constructed body to the imagination.

Gail’s young daughter, Courtney, is also in a barrel.

Though the judge is mightily unimpressed a hearing is scheduled. Media coverage generates a call to Jane with a tip on where to find at least a fair amount of Larry’s hidden money.

I appreciated Jane’s use of her legal skills to exploit the information and get the court order needed to open up a safety deposit box containing thousands of dollars. Little to follow involves legal talent.

Shortly thereafter, Jane and a handsome young lawyer, Bryan, are in a street confrontation with Larry in which she is almost shot. While at the hospital after the incident Jane learns Larry has been murdered.

The rest of the book sees Jane working to solve who, out of multiple candidates, killed Larry.

Jane reminded me of the wise cracking heroines of the 1940’s who are tough and quick with a quip. At one point I wondered if the story actually was set 70 years ago as there is reference to a typewriter and ribbon in Larry’s office. But such modern technology as cell phones convinced me the story was in the present.

I wanted Jane to be a great character. I liked her a lot but her breezy approach to life does not work well for me in the 21st Century.

I found myself wishing that the story was not about Jane dealing with some ordinary mystery over the lost money of a ne’er do well, now I am drifting back in time. I would have preferred to see Jane applying her wit and wisdom on some major commercial malfeasance.

I regret to say I found the reading a chore and the book took far longer to read than it should have for me. I expect readers who want a lighter mystery with a nifty heroine would enjoy Jane. Unfortunately, Weave a Murderous Web was not for me.

With most of the characters handsome or beautiful I think the book would have worked better as a television show.


The back blurb says the authors “have been married for a little over forty years and have produced about twenty books and exactly three children so far. At press-time, they still love their children more”. I wish them well but will not be reading another book by Ms. and Mr. Hicks.
Posted by Bill Selnes at 10:44 PM