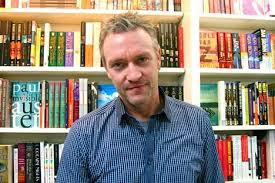 In my last post I put up an email letter to author Michael Helm on whether he considered his book, After James, to be crime fiction. I appreciate he promptly responded. Below is his email and another email I sent to him. He advised in a further email I could post his first email.

Thanks for getting in touch. It's always good to hear from readers -- I really do appreciate anyone who spends time with one of my books -- and to hear from anyone I'm guessing might be a Rider fan.

I can only say that I was surprised and delighted to be recognized by the Arthur Ellis Awards. Awards nominations bring more readers. It's true that After James, though it employs some of the devices of popular genre fiction, and considers popular fiction as a sort of theme, doesn't conform to the traditional mystery-resolution pattern of most crime fiction (there might be a sort of solution to the mysteries, but maybe it's provisional, and doesn't appear where we expect it to). Maybe the novel's intentions, what it hopes to offer readers, aren't those of traditional crime novels. But of course it's also true that some crime novels share the human aesthetic concerns of literary fiction, and that literary novels often fit genre categories of play against them consciously.

One benefit of awards lists is that they get people talking seriously about books. I'm happy the Arthur Ellis list has begun another conversation.

Good luck with your reading, Bill.

Thank you for your prompt reply.

As you did not mention not posting your reply it is my intention to post it tomorrow night. If you would like it kept private I would request an email tomorrow before the evening.

You are correct that I am a fan of the Riders. My interest in writing and sports led me to start writing a sports column. This year is my 40th season covering the Riders. I have enjoyed and continue to enjoy writing about sports. In 2013 I was inducted into the Football Reporters of Canada wing of the Canadian Football Hall of Fame. I am the first reporter to be inducted who writes for a weekly newspaper.

In case you are interested I include a copy of this week’s column on the late Don Matthews as a part of this email.