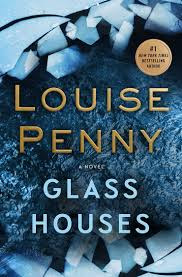 Glass Houses by Louise Penny – Yet again Louise has written a mystery with Armand Gamache that I find both wonderful and irritating. As I have done with recent reviews of her books I shall divide this review into multiple posts.

Glass Houses opens with a new surprise on the status of Gamache. He is neither the Chief Inspector of most of the series nor the Commandant of the Surete Academy as he was in the last book, A Great Reckoning. He has been chosen to the head of the Surete – the Chief Superintendent.

In that position he is deeply concerned about the never ending war on drugs, more specifically, the increase of opioid trafficking in Quebec. He fears the war has been lost but wants to undertake a dramatic blow against the traffickers.

As he plots his strategy one of the most enigmatic characters in contemporary crime fiction appears at a Halloween party and then the next day on the village green in Three Pines. Gamache describes the figure as it first presented itself at the party:

One guest wore heavy black robes down to the floor, and a black mask. Gloves, boots. A hood was pulled up over his head.

On the green it stands unmoving and unspeaking and unresponsive to any questions. Its presence is unsettling to the villagers who want it removed but the figure has done nothing but stand there. Gamache tells his fellow villagers they cannot arrest a person for standing in a public place. Gone at night it appears each morning.

The figure is a malign presence. For most it represents Death come to pluck someone from Three Pines.

Regular visitors to the village startle Gamache and the residents with their thoughts that it is a cobrador, a figure from Spanish culture.

The current cobrador del frac is a form of debt collector. Dressed in a top hat and tails they silently follow a debtor day after day, all day long, until the debt is paid. Their presence shames the debtor into paying what is owed.

Yet they advise him that there is a more ancient cobrador whose costume is the same as that worn by the figure still standing in the village. The medieval cobrador appears to “follow people who had done something terrible …. for which they had not been held accountable”. The original cobrador acts as a public conscience. But for whom has it come within this quiet village? Every villager could recall personal misdeeds for which the cobrador could have come.

Tension builds and builds and then there is a murder in the local church with the body found by Madame Gamache. The cobrador is clearly involved. The victim is dressed in the robes of the cobrador.

The investigators of the Surete swarm to Three Pines for another murder investigation.

Of the villagers only the “demented” poet, Ruth Zardo, plays a major role in Glass Houses. Through the series she has been a form of conscience in the village. With her insight into the human psyche and wicked tongue she can recognize the presence of conscience.

Through the book winds the testimony of Gamache at the trial of the alleged murderer half a year later. In an unusual form of twist for Louise we know neither the name of the cobrador nor the person charged with murder as the plot proceeds. I did not identify either of them until they are revealed by Penny.

The brooding presence of the cobrador commands the plot. I shall not forget the cobrador.


(My next post involves what frustrates me about the book.)
Posted by Bill Selnes at 10:00 AM